Welcome to the latest in our regular series, You’ve Been Where? In this series we throw the blog over to you to find out where you’re latest travel adventures have taken you. In this post we catch up with Hazel and John Squires, a retired couple who now spend as often as they can travelling the world!  And really, let’s face it, who doesn’t want to make like a gladiator at the Colosseum or be serenaded on a Gondola?

We are John and Hazel Squires. We are now retired so have more time for travel, especially out of season. John used to be a prison officer and I worked at a school as a teacher’s assistant. We have done more travelling in our later years as previously we were too busy bringing up our four children. We live in Mooroolbark, Victoria, Australia. This is not too far away from Melbourne in the eastern suburbs. It’s a pretty area that is about an hour’s drive to Melbourne and is close to the Yarra Valley and all its wineries and the Dandenong Ranges.

We went to Italy In August. We decided to do a bus tour, as we wanted to see and learn as much as we could in a short space of time. Also, we were unsure of finding our way around in a different country.

We did a 13-day bus tour – ”The Highlights of Italy” with Trafalgar Tours. We started in Rome where the highlights were the Colosseum, St Peter Basilica and the Trevi fountain. We were surprised to note how near everywhere was and how easy it was to negotiate directions.

Next we visited Pompeii where we did a walking tour with a local guide. This was quite an emotional experience seeing all the preserved buildings and mummified bodies and objects. Of course there were the obligatory tourist stalls. 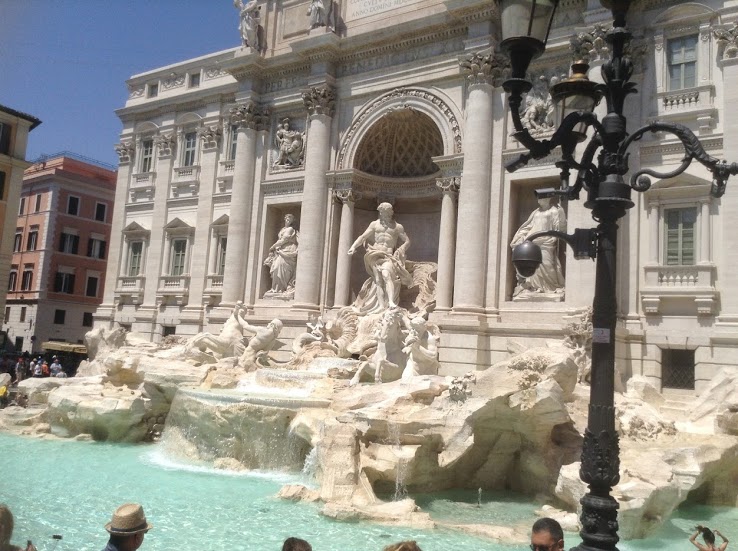 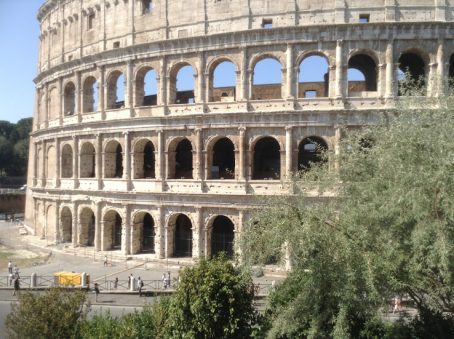 Surely we don’t need to caption this? 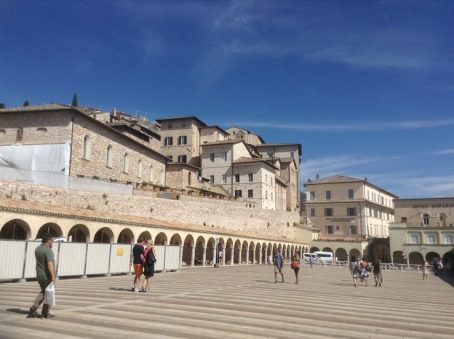 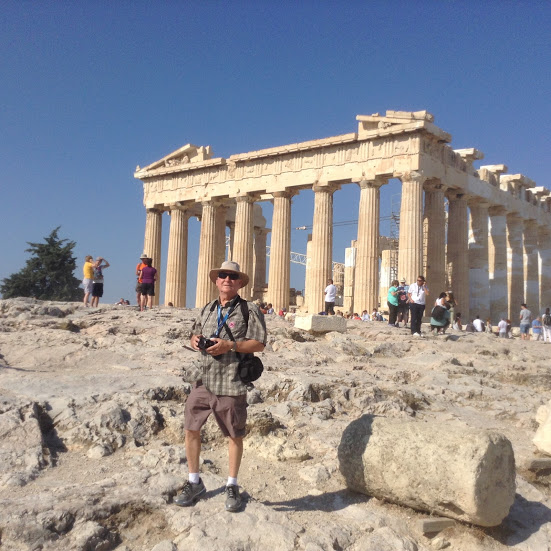 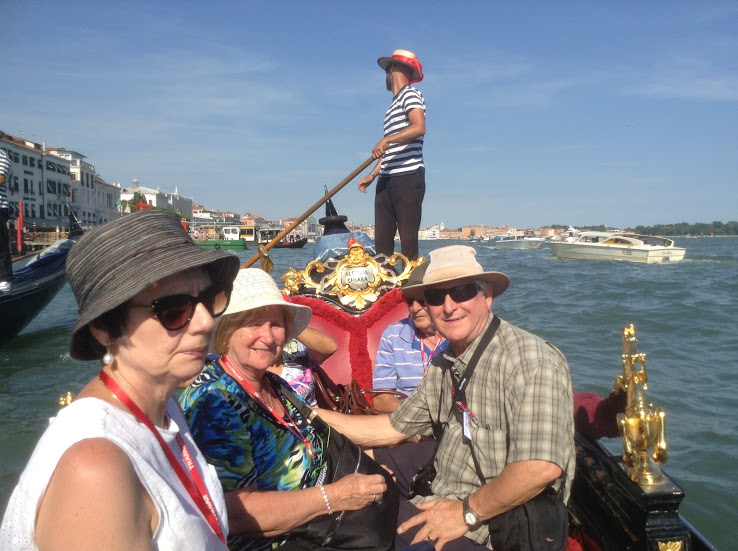 Next came Sorrento and the Isle of Capri – both were beautiful and the Commonwealth War Cemetery at Monte Casino a tribute to the fallen allied soldiers. Next stop was Assisi in the beautiful Umbrian landscape. We stayed the night in a monastery and I expected it to be very austere. In fact it was quite palatial with very comfortable rooms. We visited the Basilica of St Francis who was a rich nobleman who turned his back on his wealth to become a monk and care for the poor.

Next stop was Venice. Here we went to St Mark’s Square, the Doge’s Palace and the Basilica. St Mark’s Square is fascinating with a big central square and back streets full of interesting shops and cafes. The Doge’s Palace has splendour and yet crossing the Bridge of Sighs there is a prison where the Prisoners were kept in appalling conditions. Hence the name as there was no hope for them.

Venice is a fascinating place full of bridges, back streets and history. The gondola rides are not to be missed, especially if you are being serenaded.

We then went on to Verona, Milan and the Italian Lakes District where we saw La Scala Opera House and the famous Galleria, and magnificent century old houses full of artefacts and paintings.

As we were on a bus tour there were many people mostly from New Zealand and Australia. It was fun getting to know them all and hearing their travel stories. We made many friends.

It would be difficult to pick highlights as everywhere was just so awe-inspiring. One of the highlights was being upgraded to a 5-star accommodation overlooking Lake Maggio where we had a balcony and could enjoy a wine.

In Florence we went to the museum to see the Statue of David. He had been moved there for safety because of vandals. There are statues everywhere you look and wonderful market areas. We had been told about a café that did the most wonderful apple tarts and set off to find it. It was called “Zar Zars Trattoria” after finding our way through a maze of streets we found the café, which was fronted by three shop windows. We decided to have a meal as well, which was delicious, and very filling but we still managed to fit in the apple tart! A treat not to be missed!

We must mention our visit to Pisa and the leaning Tower we didn’t realize there were so many other sights to see in the area and spent a happy afternoon exploring the church and reading all the information about the tower etc. Also the visit to a glass blowing demonstration on Giudecca Island. This is similar to the famous Murano Glass. 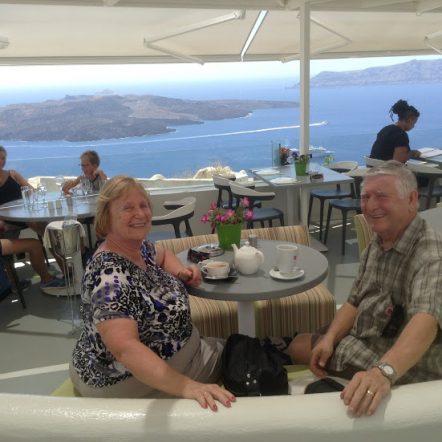 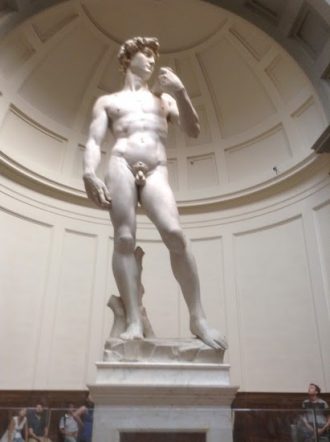 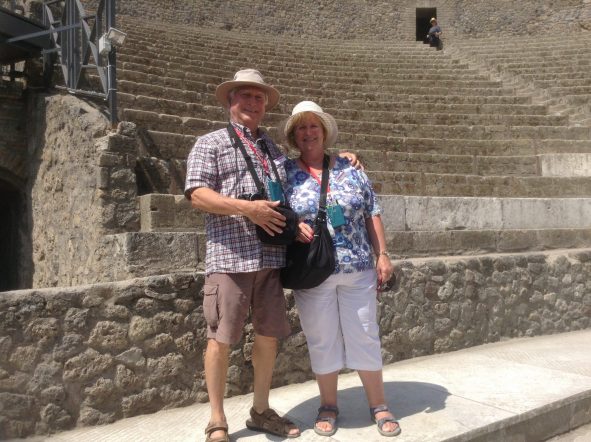 As we went in August the heat was very tiring and also bus tours try to show you as much as possible and don’t leave much time to relax.

It was fun trying to traverse the narrow roads on the right-hand side of the road where we were kept amused watching the Vespa riders weaving in and out of the cars, busses and trucks, they must have a death wish!!

We were at a local market one day just wandering round and spotted a nice looking café, deciding to have a salad roll we sat down. Unfortunately they didn’t speak English here and we had great fun trying to describe what we wanted it all added to the fun of the trip.

The locals were very friendly and helpful, and although we don’t speak Italian it made it easier that most people spoke English. We did try to learn a few words though.

The food in Italy is of course mostly pasta, pasta, pasta and Pizzas. All very nice and we did go to restaurants that served a variety of meals with delicious desserts. We found a fantastic Italian Restaurant – La Cucina Nazionale in Rome, quite near the station, that we visited twice as the meal was so good. Also in Rome at the train station there is a café where you can get a lovely snack. 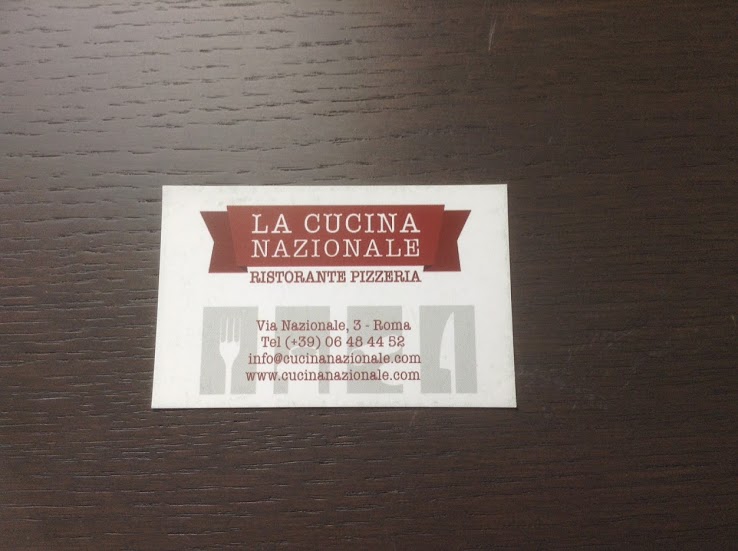 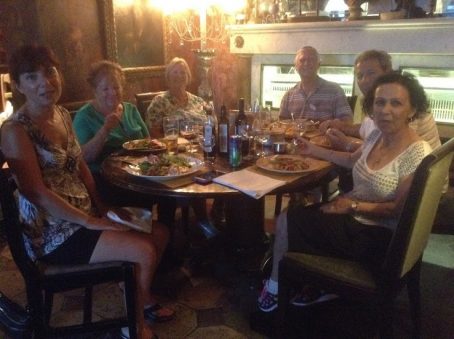 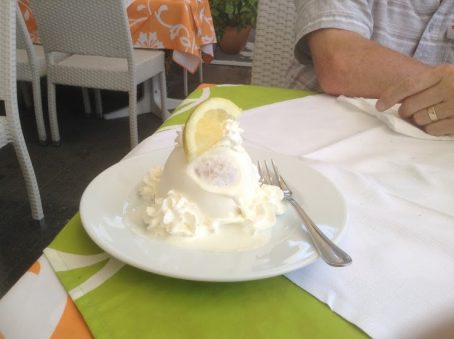 We would definitely recommend this trip for the sights, history and beautiful countryside. Also Trafalgar Tours for the care they took in looking after a mixed group with varying ages from 20 to 80 years of age.

We had a wonderful tour guide on our bus tour. His knowledge of local history and the care he took of a group of people of varying ages was commendable. Make sure you have good walking shoes as some of the walks are very steep, especially up to the colosseum and all the bridges in Venice. Take plenty of suntan lotion, especially if you go July-August as they are the hotter months. A better time to travel would be June or September. Don’t be afraid to go down some of the smaller back streets. We found many delights in exploring them.

Also be aware that in some fast food outlets where there may be tables and chairs, you must not take pre bought food into these areas.

Been somewhere lately? We’d love to hear about it. Drop us a line or leave us a note below.

Scroll down to see next article
Myanmar