I’m sitting on a beach gazing out over a small island. A light drizzle is falling around me, but I’m not sure whether it’s the rain, or seaspray coming off the ocean.

In front of me, next to the island, a huddle of boats are stationed in the water, while a lone boatman fights against the waves to row his small timber boat out to meet them.

But I’m not here to see them. I’m here, with my sister Julie, to try and get a glimpse of Mieu Ba Temple, a small temple in the middle of Hon Ba island.

We’re in Vung Tau, Vietnam, for two nights for the magazine that I’m guest editing for a month. Here to check out the major sites and write an article on the city.

And this temple is not your usual temple. 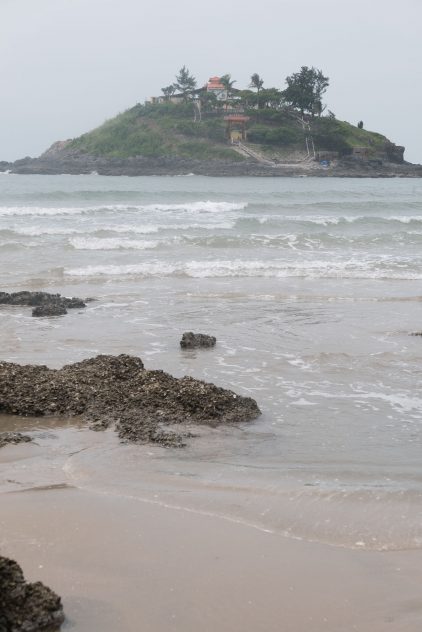 Mieu Ba Temple – often referred to as Lady Temple -on Hon Ba Island in Vung Tau. Sadly the tide was in so there was no way to get across. 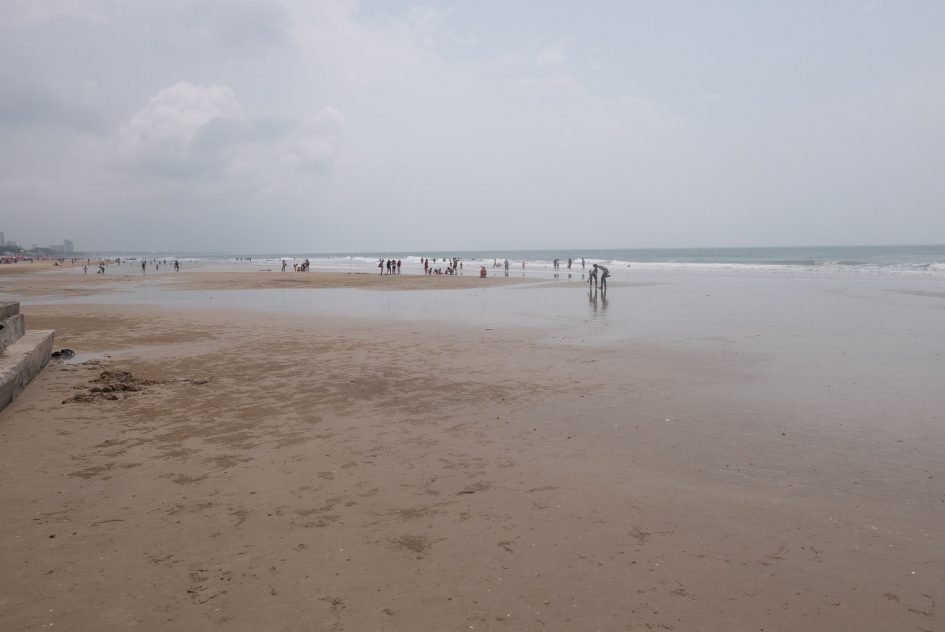 The Main Beach in Vung Tau, Vietnam. Somehow we were expecting the beach to be a little busier than this…

Sometimes referred to as Lady Temple, the temple was built by fishermen in honour of the Goddess of the Sea.

You can only access the temple when the tide is out, revealing a rocky path to cross to the island, so make sure you check with your hotel when the best time to visit is.

Sadly we missed the crossing – it was early, apparently, very early – and there are no boats on the shore to take us to the island, so our views are limited to watching and imagining from the mainland.

As the closest beach to Ho Chi Minh City, Vung Tau is a popular spot for weekend getaways.

And it’s a city full of surprises.

“The people from Ho Chi Minh just come to the night markets, they come with their ice boxes, buy their fish and get out,” one local expat tells me.

While another tells me two days isn’t possibly long enough in Vung Tau.

“There is so much to see, you need at least a week,” he says.

I had researched the city before I left Ho Chi Minh, of course, had scoured websites to find out the best the coastal city had to offer, and was left with an impression that Vung Tau was a small seaside village with just a smattering of interesting attractions. And yet what I found, as I explored the city for two days, was a large city centre with a vast array of sights to visit.

Perhaps what surprised me most about Vung Tau was the many layers of the city. Just when I think I’ve got it figured out, have got my bearings and think I’ve made note of all that there is to see, I discover more.

We are staying at the Wind Boutique Resort, midway between front beach and back beach, but inland and midway up Small Mountain. The hotel provides a free shuttle to the major sights and will come and pick you up when you’re finished. If you don’t have a local phone, the hotel will even lend you one so that you can contact them if you need to. The resort is lovely, as is its sister hotel, Wind hotel, just around the corner, and its currently undergoing renovations for expansion. We stayed a night in each so got to compare the two.

Jay, the hotel manager tells me that as well as extra villas, they’re adding a rooftop swimming pool to better capture the views at the Resort.

Our first stop in Vung Tau, after arriving by ferry late afternoon, is front beach where we watch the locals brave the rocky waters. We walk the six kilometres around to back beach, identifying bars and cafes, temples and tourist spots along the way. 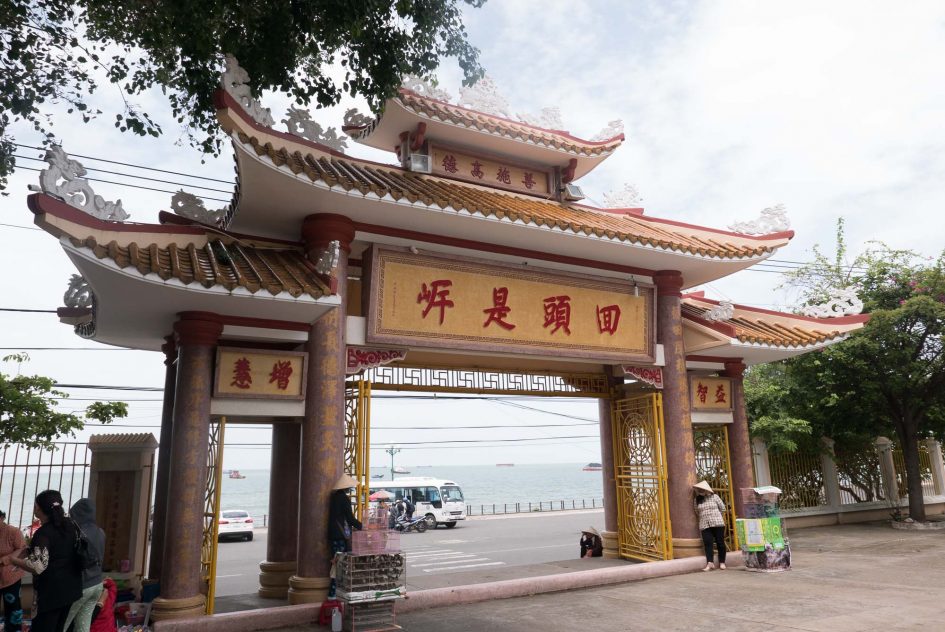 Now that’s an entrance! The stunning gate at the entrance to the Quan the Am Bo Tat Pagoda. 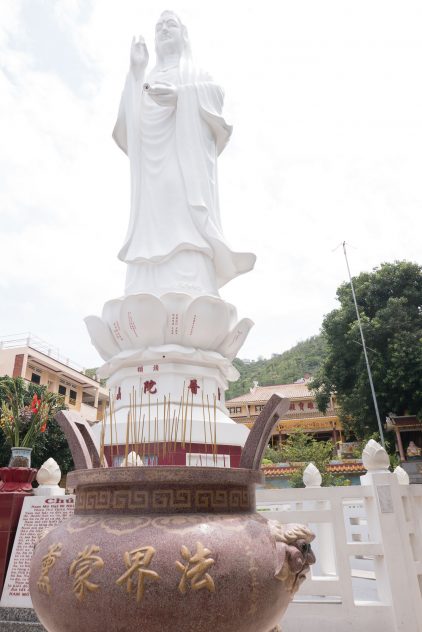 The Avalokitesvara Bodhisattva statue is a striking welcome to the Quan the Am Bo Tat Pagoda.

Back beach, the more popular swimming beach of the two is full of tourists making the most of the last of the daylight hours and we watch as the sun sets over the Pacific ocean.

The following day we are up early for a full day of sightseeing.

Our first stop is Quan the Am Bo Tat, the Pagoda of Avalokitesvara Bodhisattva, a striking temple that sits on Tran Phu Street, the main road that follows the coast around Vung Tau, and overlooks the ocean.

Immediately inside the ornate gates is a giant statue of Avalokitesvara Bodhisattva standing on a lotus. The contrast between the stark white statue and the colourful pillars and walls of the temple is striking.

From the temple we make our way to the cable car and head up to check out the city’s largest and most heavily spruiked tourist attraction – Ho May Park. Ho May is part hotel, part amusement park and part ecotourism resort. Sitting on top of a hill, the resort includes a waterslide park, a temple of national heroes, religious temples, a zipliner, rollercoaster, dodgem cars, magic shows. The list is endless and while some are starting to look a little dated, you just never quite know what you’re going to stumble across next.

The next stop on our list is located just near the base of the cable car – Bach Dinh or White Palace. 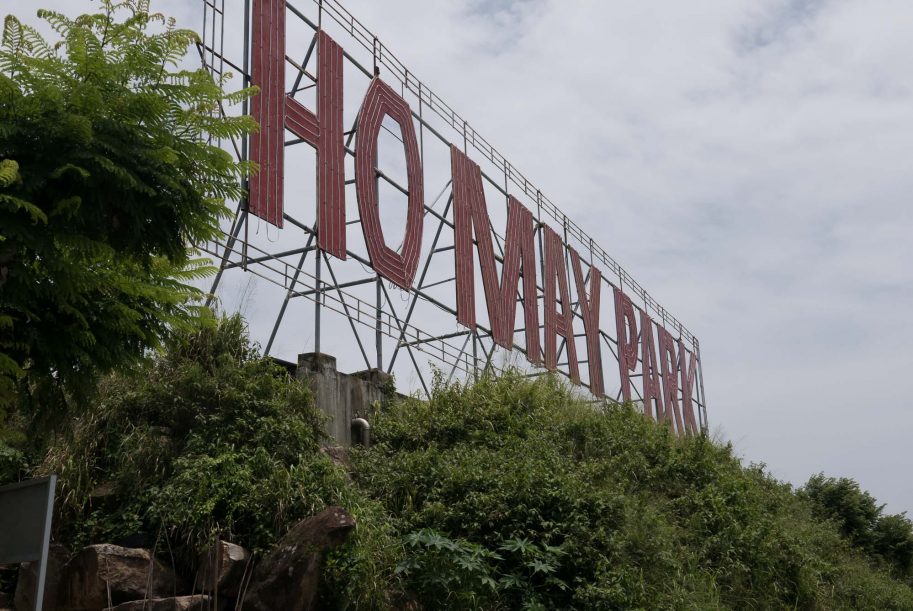 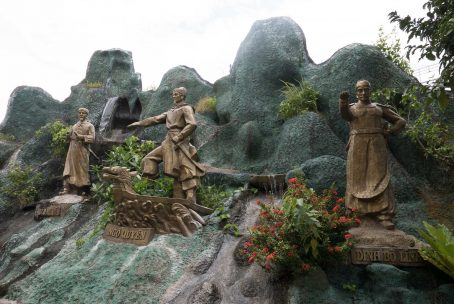 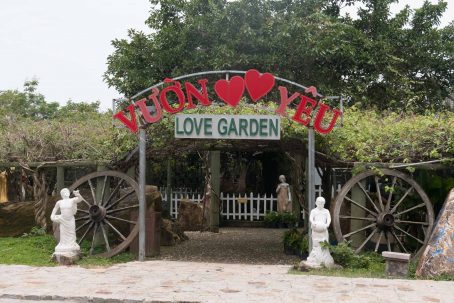 Aww, must be love… just one of the many different attractions at Ho May Park in Vung Tau. This one depicted different couples in history. 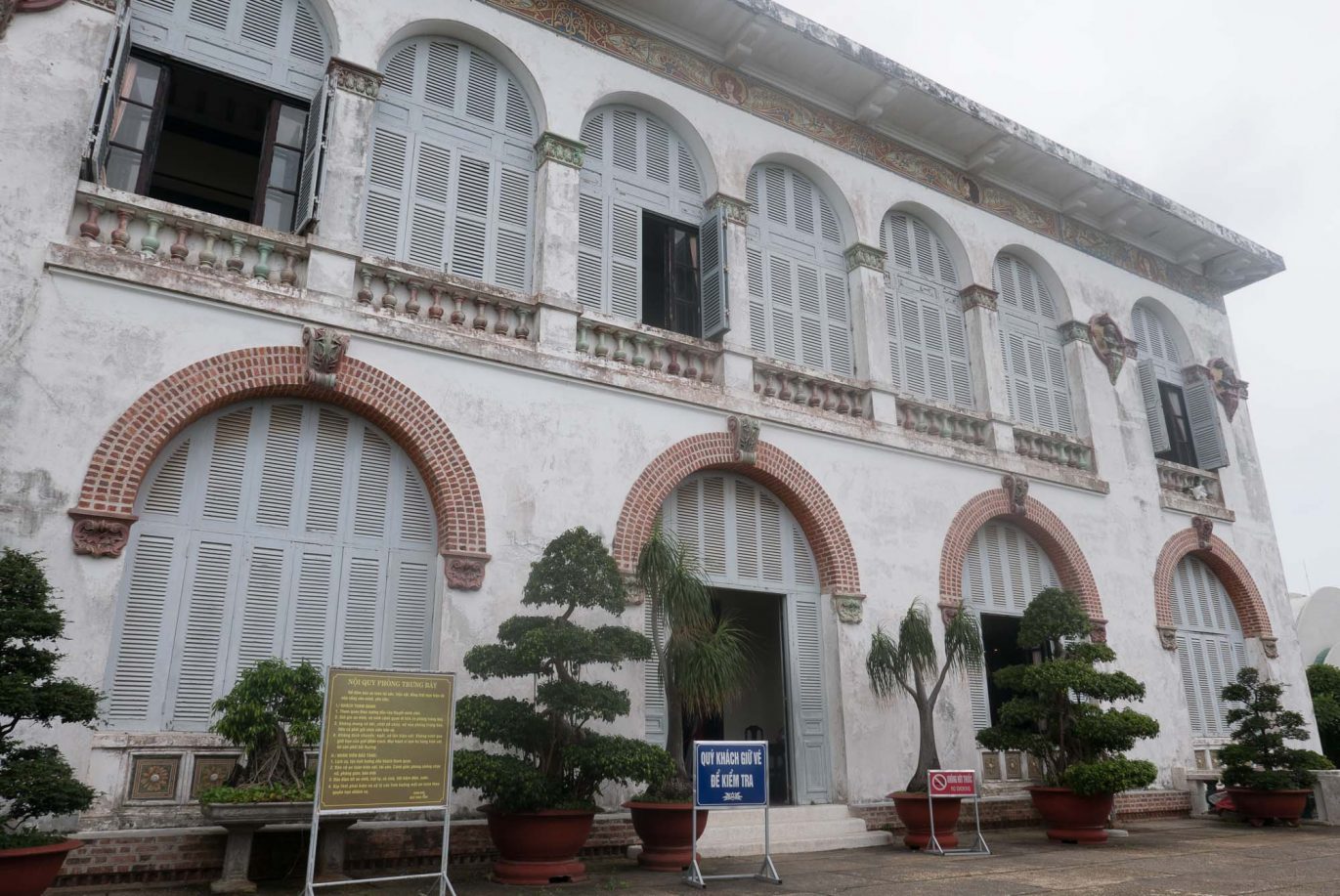 The beautiful White Palace was built in 1898 as a summer villa for the French Governor.

The White Palace was built in 1898 as a summer villa for the Indochina –French Governors. The building, which sits on a hill overlooking the ocean – again it’s located on Tran Phu Street – is a classic French building and is surprisingly small for a palace. But it’s a stunning building, set amidst lush tropical grounds. Inside is a smattering of antique furniture and an interesting display of Chinese artefacts collected from a shipwreck in Cau Islet.

Perhaps one of the most notable and popular attractions in Vung Tau though is the Tuong Dai Chua Kito Vua – Christ the Redeemer; a 32 metre high statue of Christ that sits atop Little Mountain and overlooks the city. It is six metres smaller than it’s counterpart in Rio, but still very impressive.

We climb the 811 steps up the side of the mountain – there is no vehicle access – past crisp white statues of Jesus’s disciples as well as a couple of tourist gift shops and food outlets.

The statue is just visible from the road below, above the tree-line on Little Mountain, but it’s only by climbing all those steps that you get the full experience of this imposing statue.

From the Christ statue it’s just a short walk across the road and along the beach to Hon Ba, but as we gaze down from the roadside we note that the tide is in, again.

After watching the sunset over the island we make our way to the night market. A single road sells trinkets and toys for children, while all around stall after stall offers fresh seafood for purchase or for dinner. It’s worth a visit, just for the spectacle.

Vung Tau is an interesting mix of expat bars and local restaurants, of religious temples and giant religious statues – as well as Christ the Redeemer there is a giant Buddha – of lovely beaches and sunsets and crowded city streets.

And be sure to go by boat, to start the coastal feeling before you even arrive in this charming city.

Like this post and want to use it for your own guided tour of Vung Tau? You can now access this post offline through GPSmyCity. Just go to this link to download it. For a small cost you can even download the story with GPS coordinates so you know exactly where to go! It’s kind of like having a map, a Lonely Planet guide and a travel buddy in your pocket.

*This article first appeared in AsiaLIFE magazine, where I was guest editor for a month.

We stayed at the Wind Boutique Resort and the Wind Hotel.

Was it long enough? Two nights was a great amount of time to spend here, however there was still more of Vung Tau I would have liked to have seen so I could definitely have stayed another couple of nights just to chill out. Plus, next time I’m definitely going to get out to the Hon Ba!

Highlights: The seafood at the night market, gazing out over the Hon Ba and imagining what’s inside, passing time in the many bars and cafes where the locals are all very friendly.