From Robin Hood to stately homes in Nottingham

I can’t visit England without going to Nottingham, something about being born there and having family there… so we dragged along the in-laws to soak up more of England’s history.

And of course, you can’t visit Nottingham and not go to Sherwood Forest. Ade’s dad was very excited about visiting the Forest – keen to keep an eye out for any signs of Robin Hood or, more likely, arrow heads. 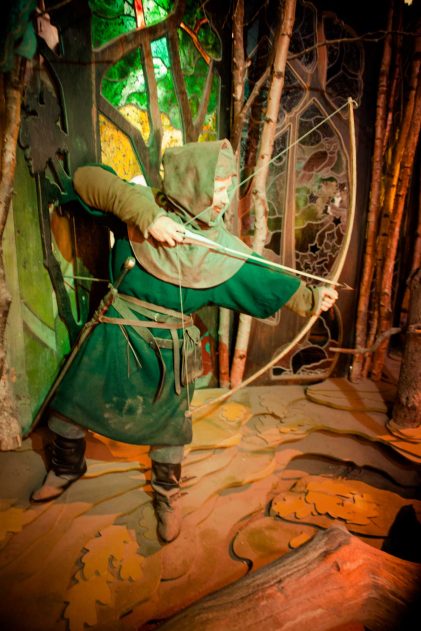 We didn’t see any of either (unless you count the 30 or so five-year-olds dressed as Robin Hood, Maid Marion and the Merry Men) but the Major Oak was far more impressive than I had remembered. It was much bigger than I thought. The trunk is the equivalent of four trees – and there is some conjecture as to whether or not the tree is in fact multiple tree trunks intertwined to look like a single trunk.

There is also a really interesting visitor centre here.

Last time we were in Nottingham I had really wanted to see Wollaton Hall. I had grown up hearing stories about picnics at Wollaton Hall and watching cinefilm (long before digital and videos we had cinefilm) of myself as a baby in the park. The first time we had visited England was battling Foot and Mouth disease so many of the parks, including Wollaton Hall, were closed to tourists.

This time I was determined to see it.  I had seen footage and plenty of photos of Wollaton Hall, but wasn’t aware that it was a huge stately old home, built in the 1580s. The day we arrived it had just reopened after being closed while they filmed scenes there for the latest Batman movie. The building is stunning, it must have been a beautiful home once upon a time, but now it is home to the Natural History Museum. And while you can still see the beauty in the old building, it is now in a state of some decay and disrepair. They are fixing it up, but of course  these things take time and money.

However the gardens are lovely and it’s worth wandering around both the buildings and the gardens for an hour or two.

Unfortunately the castle at Nottingham was burned down years ago and instead of rebuilding it as a castle, it now serves as a gallery, we went into the castle last time we were in Nottingham hoping to see, well, a castle, and it was quite disappointing, so we didn’t bother going in this time.

From the outside the castle looks very impressive, sitting high on a hill with a giant wall all the way around it. Set into the wall is Ye Olde Trip to Jerusalem, believed by many to be the oldest pub in England, the crusaders used to drink here before heading off on a crusade. And it’s definitely worth sitting in here and having a pint – yes it’s still a working pub – and imagining the battle planning that might have taken place here.

There are tunnels from Ye Old Trip into the castle itself, which would make for a really interesting tour. Unfortunately we weren’t in Nottingham long enough to tour the castle caves, but maybe next time… 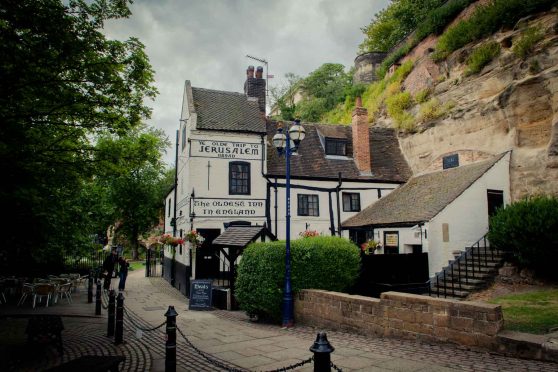 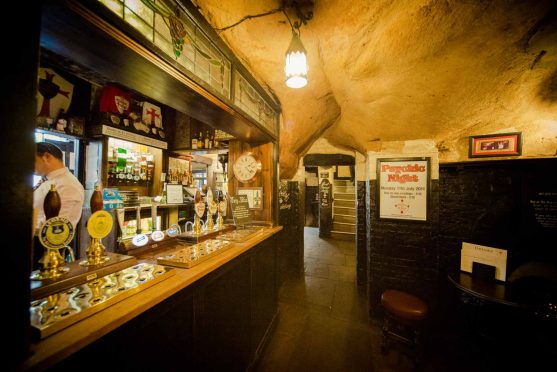 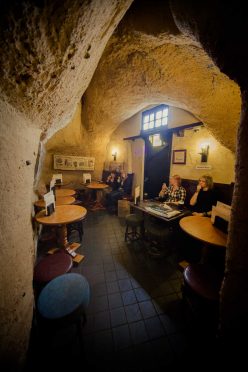 Nottingham is an interesting town, there is so much history there and the legends of Robin Hood and the Sheriff of Nottingham have given it an interesting profile, unfortunately they haven’t retained the old streetscapes. The city itself could be any city anywhere in the world – albeit with a giant castle keeping watch over it!

There is the odd cobblestone street and the odd monument to the past, but so much of the physical history has been lost.

Enjoy this post and want to use it offline to guide your own adventures in Nottingham? You can now access this post through the GPSmyCity travel app. For a small cost you can even download the story with GPS coordinates so you know exactly where to go! It’s kind of like having a map, a Lonely Planet guide and a travel buddy in your pocket. You can access the app here.

We stayed at Britannia Nottingham Hotel, it was clean and in a good location.

Was it long enough: There is actually a lot to see here, plus we had family to visit so we could have done with longer. But overall two full days is probably enough.

Highlights: We have visited the war tunnels here previously and they are well worth seeing, don’t miss Sherwood Forest and Ye Olde Trip.

Have you been to Nottingham? What did you think, what were your highlights?