We’re swinging in a cable car high above La Paz, one of the highest cities in the world. It’s an awesome feeling. Below us we can see the curving roads, the cramped buildings, some perched precariously on the edge of cliffs, and the surrounding arid craggy landscape.

At 3650 metres above sea level, La Paz is high, very high. The city sits in the caldera of a volcano giving it an otherworldly feel, a crammed city of more than 215,000 people. It’s chaotic, it’s intriguing, it’s interesting, it’s quite simply awesome!

Far from being a tourist attraction, the cable cars have been designed to move people around the city, so for about 80c, locals can travel anywhere in the city centre above the mayhem of the traffic below. There are currently four separate cable car lines crisscrossing the city skyline, with plans for more. The best way to get around in La Paz is by cable car, swinging high above the traffic below. 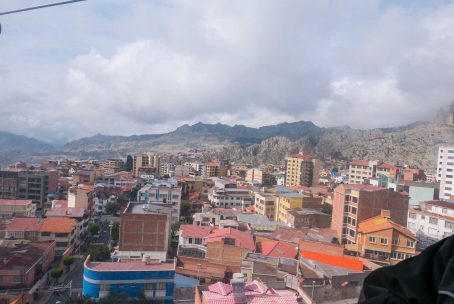 Views over La Paz from the Cable Car, the best way to get around the city. 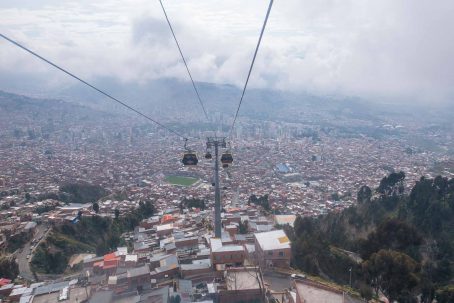 It’s a long way down from here! Hanging above the city on a cable car in La Paz.

I’m travelling as a host with Two’s A Crowd and we’ve already travelled through Peru, so we’re used to high altitude, but we’re not quite used to anything like this.

We walked through Bolivia’s border with Peru after a couple of days on the serene waters of Lake Titicaca. Our guide, Leo, had warned us there might be huge queues to get into Bolivia – expect to wait for hours, he had said. Fortunately, when we get there, there’s not a queue in sight, so after changing our Peruvian Sols for Bolivian Boliviano (yes, that’s what the local currency is called), we make our way through customs and step foot in Bolivia.

Our new bus is waiting for us – a large luxury coach for 12 of us; sadly it doesn’t want to move so we wait while our guide organises two local taxis to take us to the ruins at Tiahuanaco, a Pre-Incan site that dates back to 300AD. Not far from the site is a small museum that helps give context to the ruins. Not far from the main temple site is Pumapunku. If you look closely at the ruins left behind here, you’ll notice perfectly cut markings and holes. Our guide points out that some people believe humans did not create these markings, that perhaps aliens had some part in it… 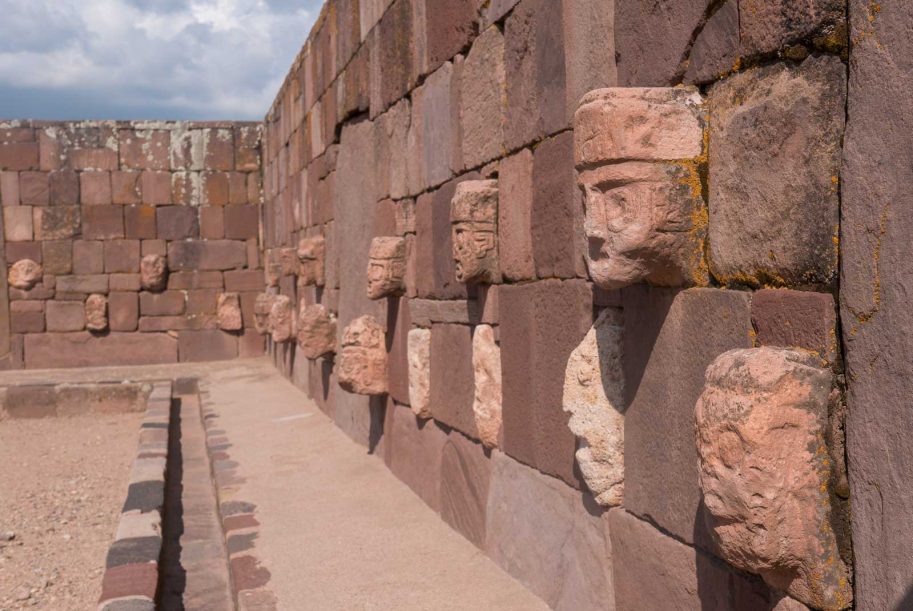 The intricate carvings at Tiahuanaco, which dates back to 800 AD. 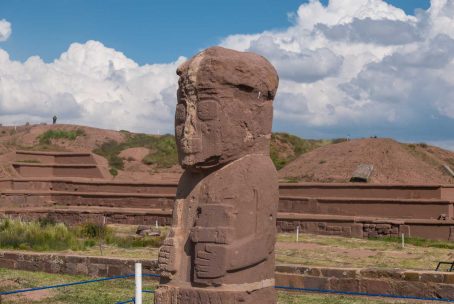 Archeological site, Tihuanaco, near Lake Titicaca in Bolivia dates back to 800 AD. 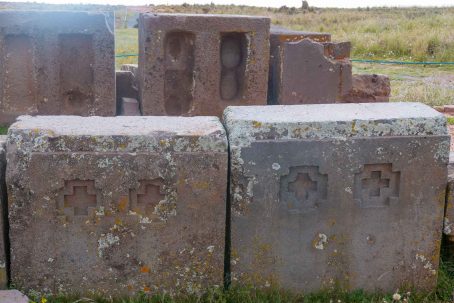 The markings on the ruins at Pumapunku,, believed to date back to AD 536. 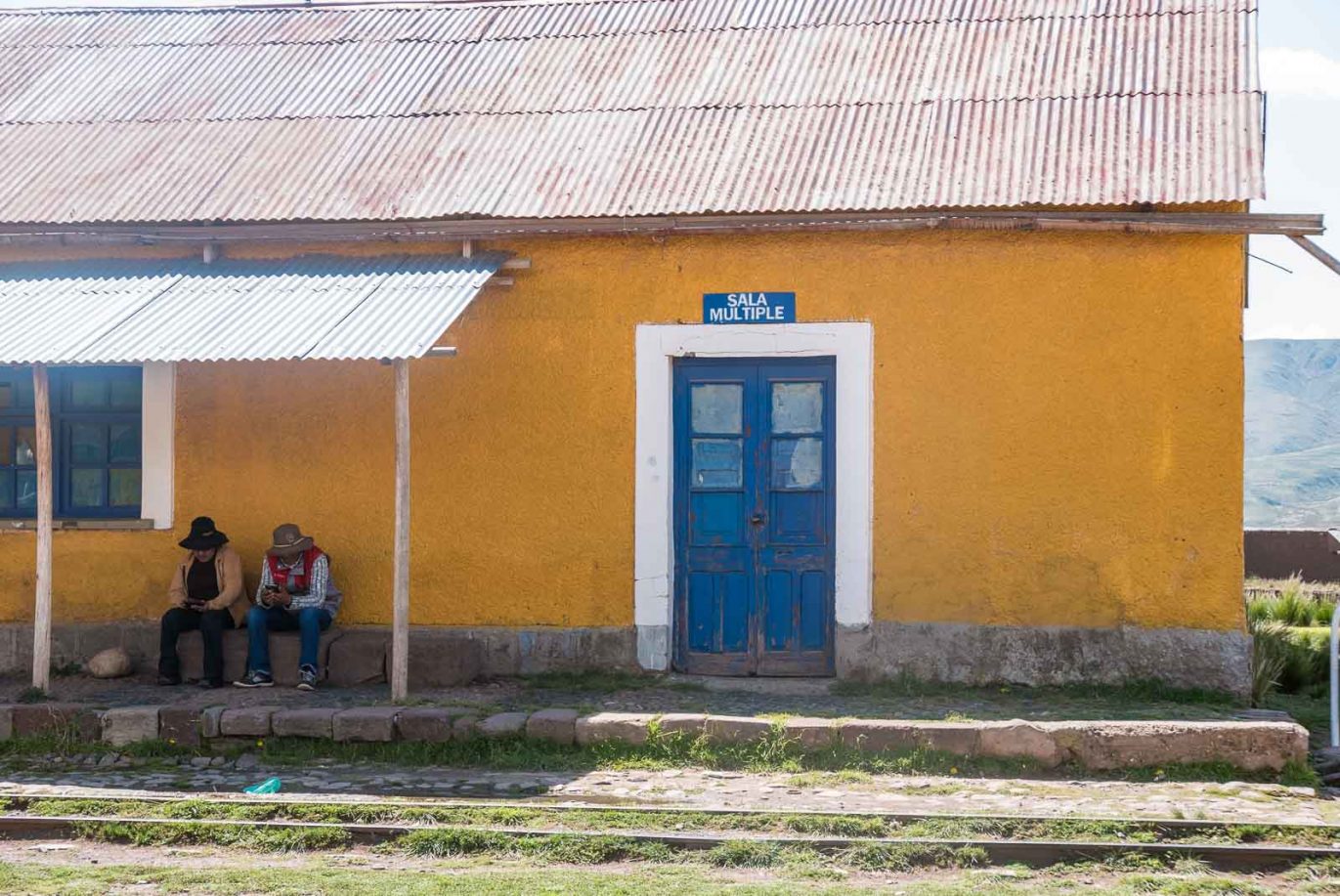 Waiting for a train… at Tiwanaka station near the Tihuanaco Archeological site.

Regardless of whether you believe it or have an interest in aliens, it’s an interesting look at civilisation and the history of the world.

The following day started with our cable car ride and then, just in case we hadn’t had enough of heights, we ventured up to the lookout for a stationary look out over La Paz. It’s a sprawling city, and from this vantage point you can take in the full vista of the caldera with the surrounding crags. 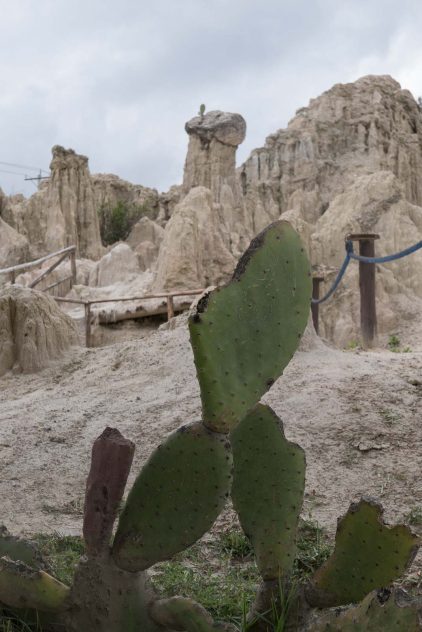 Valle de la Luna – Valley of the Moon – so called because Neil Armstrong when he visited said it looked just like the moon. 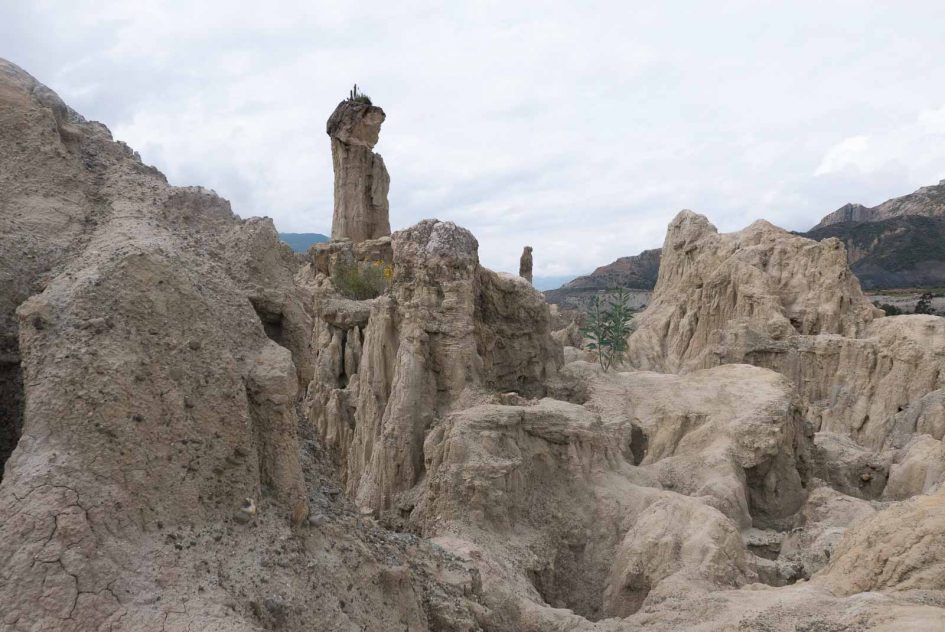 Who else just wants to scramble over this landscape?

But seeing the landscape from a lookout, is nothing compared to being in amongst it, so we load into a bus and venture out to the Valle de la Luna (Valley of the Moon,) so called because Neil Armstrong apparently visited the site and said it looks just like the moon. I always imagined the moon to be flat, this definitely isn’t, but it has the kind of vegetation I imagine you might find on the moon – nothing.

Valley of the Moon is about 40 minutes drive from the centre of La Paz. Aside from the odd cactus plant, the site is barren. Craggy mounds of earth rise up like termite mounds out of the earth, but this is all naturally formed. Wooden platforms make it easy to meander through the site.

Back in town, and we make a quick stop to taste the local delicacy saltenas – somewhat similar to a pasty, though smaller and tastier, it’s a pastry filled with different types of meats and vegetables.

Then we’re off to the witches market. I’m a little excited about this stop, and very intrigued. The market isn’t actually a market in the conventional sense, at least not anymore. It’s actually a series of shops that sell all kinds of lotions, potions and amulets. You can even find llama foetuses here…

But if you’re not into that kind of thing, the people watching here is amazing; just don’t be fooled by the women in local costume. You may think they are saving money by choosing traditional dress over modern clothes. They’re not. Our guide tells us the outfits can cost up to $5000 including the hats and all the skirts! 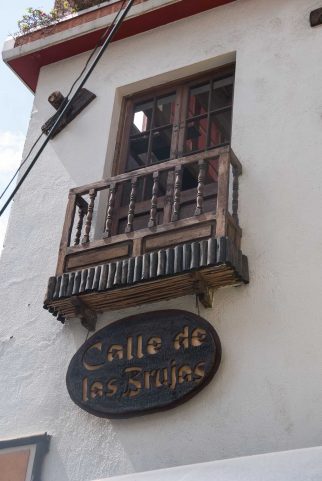 We finally made it to the Witches market in La Paz! 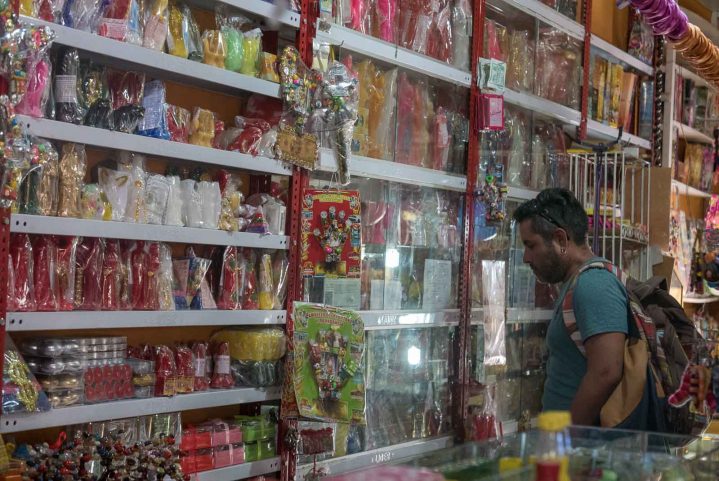 Our guide, Leo, looking for some potions in the witches market. 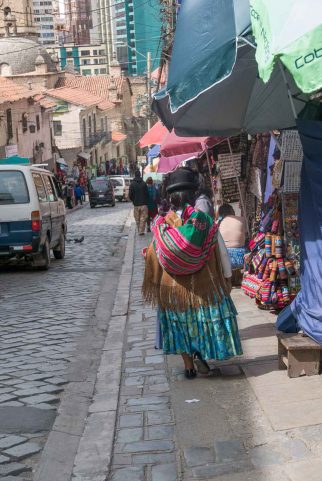 We stayed at the Rosario de la Paz Hotel.

Was it long enough? We crammed a lot in the time we were here, but there is definitely more I’d like to see in Bolivia!

Highlights: Don’t miss the Valley of the Moon and the witches markets, oh and of course those cable cars!

*This was part of a trip I hosted with Australian solo tour company Two’s a Crowd.