They say when you first arrive at a new destination that sits at a high altitude – anything over about 2500 metres – you should rest immediately; lay down and do as little as possible. But when we arrive at Cusco, by plane, at an altitude of about 3390 metres, our guide Leo has other ideas.

“We’ll drop our stuff at the hotel and then go for a walk,” he says.

“I’ll give you about half an hour, we’ll meet in the lobby then.”

And so we’re off to explore the city centre. Leo believes this is the best way to ward off any potential altitude sickness. He’s been here a few times before, so we follow his lead. Though, secretly I suspect a few of us may have been looking forward to an excuse to relax for a while!

After spending the past few days in the Amazon Jungle, we’re ready for a rest before some city activity! 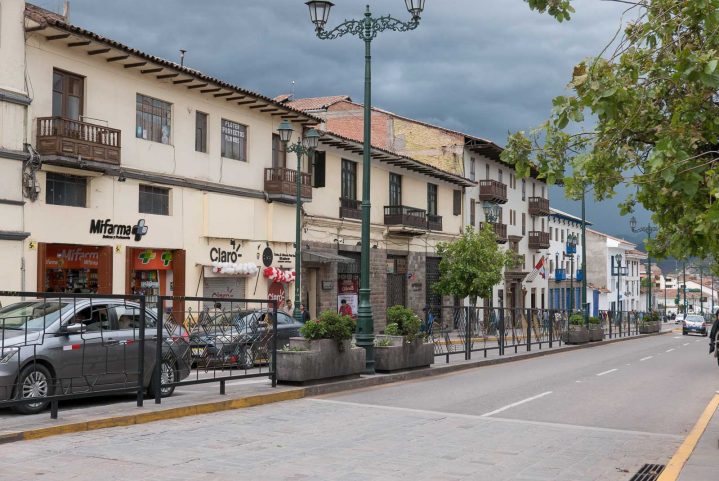 The streets of Cusco 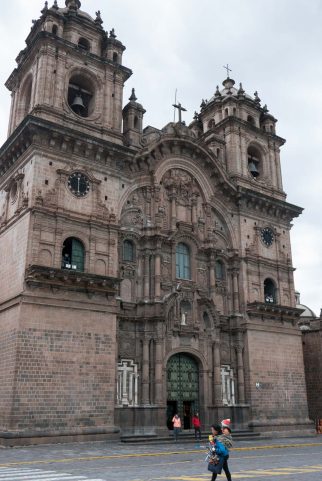 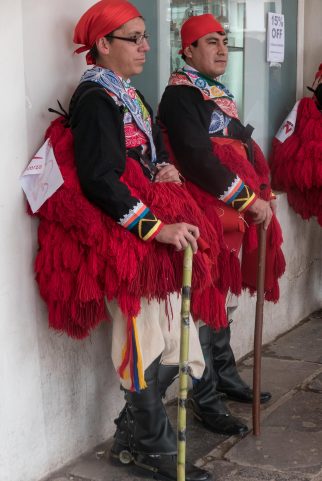 Traditional costume on the streets of Cusco 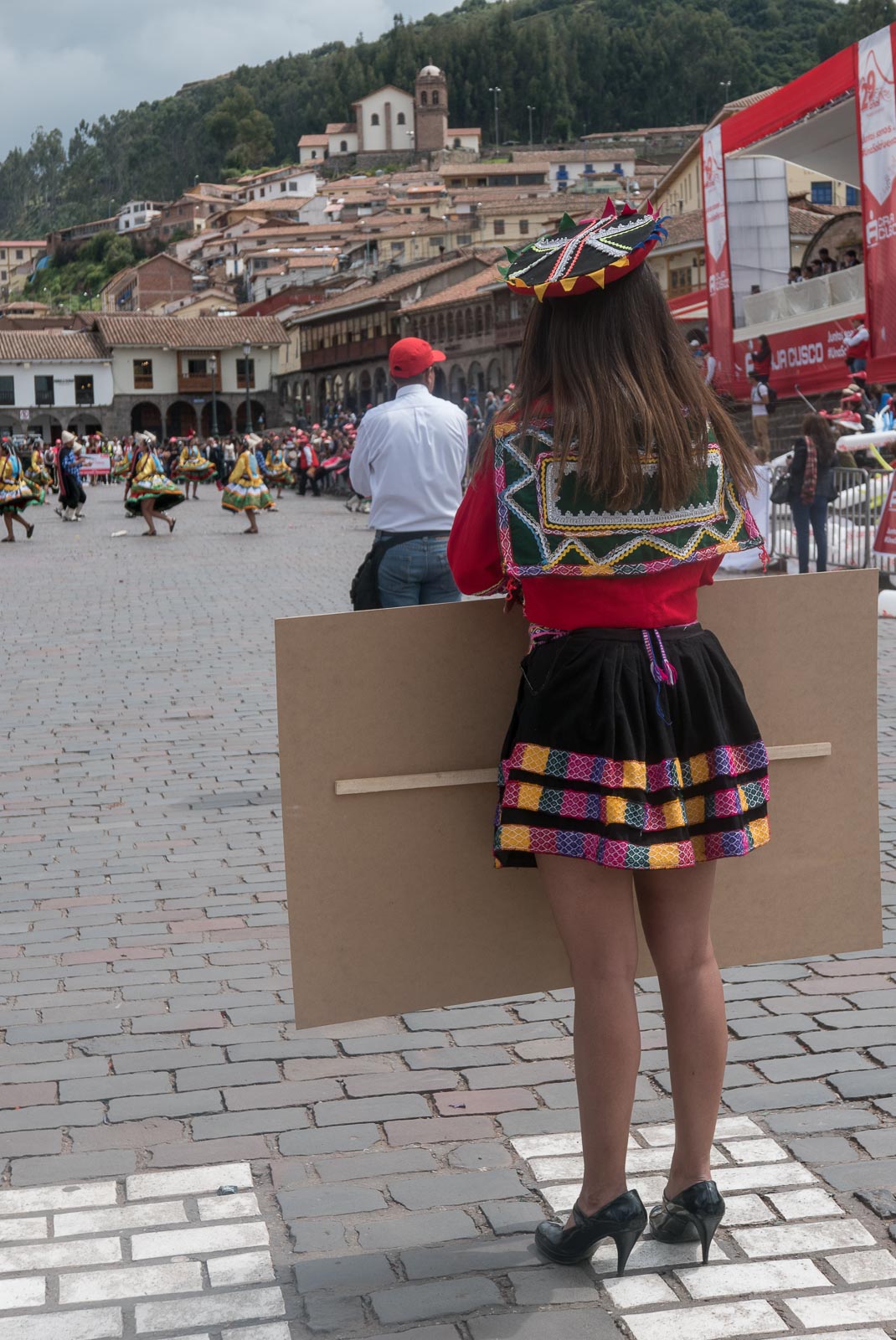 Watching a parade in the city centre

Cusco, in the Andean mountains in Peru, was once the capital of the Incan Empire and was the first Spanish capital of Peru. As such, it plays an important role in the country’s history. Today the influence of both the Incan and Spanish cultures can be seen throughout the city. It’s interesting, and a little disconcerting, to see Spanish buildings built on the foundations of Incan sites.

Our walk takes us through the beautiful Plaza de Armas – the main square – past the Cusco Cathedral and the Church la Campania de Jesus and up and down the rather steep local streets. We followed the Inca built wall along the Callejon de Loretto and stopped in a couple of tourist shops to check out the Alpaca knits and traditional local dress.

We stopped at the Coca museum – well this is Peru afterall – and learnt about uses of the leaf beyond cocaine. And in particular how it was used to offset the effects of altitude.

Cusco is a charming city to walk around, but it is very hilly and the following day it was with some relief, or so we thought, that we all loaded into a van to take us to explore a series of Inca ruins on the outskirts of town. 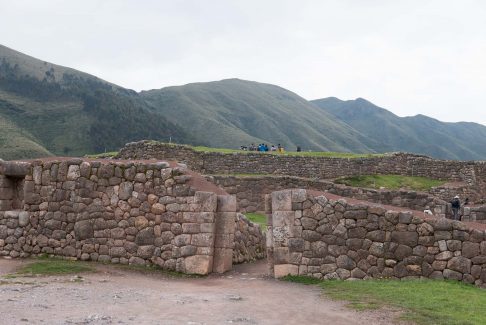 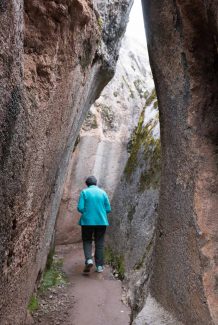 The Inca ruins at Qenqo near Cusco in Peru. 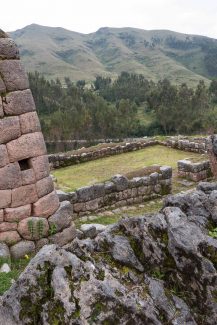 The ruins at Puka Pukura 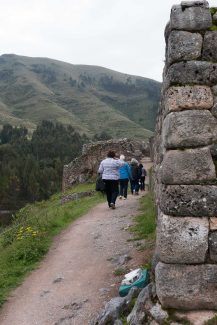 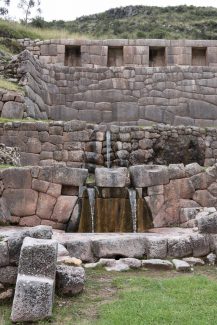 The Inca ruins of Tambomachay near Cusco.

We actually moved higher into the heavens, up to almost 4000 metres to explore the remains of this remarkable civilisation. The air was thin so we made our way through the ruins slowly, taking in the green views and imagining how the ruins must have looked when first built.

Our first stop was Qenqo and it was difficult to see that what we were looking at could have held any significance whatsoever. To the untrained eye, at least, to my eyes, the site looked like little more than a pile of rocks. But with the help of an expert guide walk, and a wander into the centre of ‘rubble’  it’s clear this structure didn’t form naturall. Cuts in the rock and a tunnel underneath lead down to an altar revealing its true origin as a temple and a site for rituals. Qenqo is said to predate the Incas.

From Qenqo we went to Pukapukara, a series of rooms and terraces set out between walls made of rock  overlooking the amazing Andes mountain range. The site is believed to be a fort used for defence purposes by the Incan Empire. Today it has lovely vistas, and of course the only battle you’ll enter into is haggling or trying to avoid buying local wares from the stall holders set up outside!

Just up the road from Pukapukara is Tambomachay – fresh water still runs through the ruins here, giving this site a beautiful tranquil feel. The site was used by the Incas for bathing, so I guess you could say it’s a very early example of a bathhouse.

The following day we were up early and on our way again. This time we were off to Sacsayhuman, a remarkable display of the sheer strength of the Inca people. The size of the rocks, carved straight and smooth, and pushed into position to build walls is remarkable. I shudder to think how this site would have been built and how many people must have lost their lives in the process. Today, the grounds are very peaceful; we even get to see a few llamas strolling around the site, but it’s difficult not to think about the massive effort and the number of people that would have been needed to get those rocks into place!

There are so many museums and ruins in Cusco it’s difficult to fit them all in in one trip, and to be honest, unless you’re a real history/museum buff you could probably give most of them a miss. We were starting to feel a little ‘ruin-ed’ out and were keen to see some more wildlife. I mean, how could you not want to see more llamas and alpacas!  We visited the Awana Kancha llama and alpaca reserve and the Ccochahuasi Animal Sanctuary. At both sites you can get up close to the wildlife (look out for the Peruvian hairless dog at the animal sanctuary!).

Want to know more about Peru? Find out five amazing things to do in Peru here.

We stayed at the San Agustin Plaza Hotel

We were here a total of four nights.

Was it long enough? There is a lot to see in and around Cusco and it’s a lovely city to chill out in. Four days was long enough, but there was definitely more we could have seen if we wanted to stay longer.

Highlights: The llamas and alpacas both in the Awana Kancha and at the ruins, anywhere really! Sacsayhuman for the sheer size and scale of the site and the rocks used to make up the walls,

*I travelled to Peru as a tour host with the Australian solo travel company Two’s A Crowd.