Australia Oceania You've been where?

Wombats, wallabies, abundant birdlife, guest author Katherine Smith paints an idyllic scene of Flinders Island in the latest post in our You’ve Been Where series. Just try to avoid the snakes. And now we’re dreaming of rugged landscapes and lichen-covered rocky shores…

I’m Katherine and I work at the University of Melbourne, where I do all sorts of marketing and communications projects.

I live in Woodend, a village in the Macedon Ranges, about an hour north of Melbourne, with my partner Brian and two lazy, spoiled cats.

In September 2016 Brian and I spent a week on Flinders Island, a mountainous 1,367-square-kilometre island in Bass Strait, northeast of Tasmania, with a permanent population of around 800 people.

For nature lovers Flinders Island is amazing, a stunning, truly rugged and incredibly varied landscape, with the most amazing bird life. It’s the southernmost location on the East Asian Australasian Flyway for migratory birds and there are a couple of official Important Bird Areas. We kept a list of everyone we saw or heard, which was quite long by the end of the week.

The waters are considered some of the most pristine in the world, and the lichen-covered rocky shores and golden sand spectacular. September was too cold for swimming, but we paddled and vowed to come back in the summer sometime. Mount Strzelecki, at 756 meters, literally rises up out of the ocean. There are giant granite boulders looming about everywhere which give it an otherworldly atmosphere. There’s a definite spirit of place. 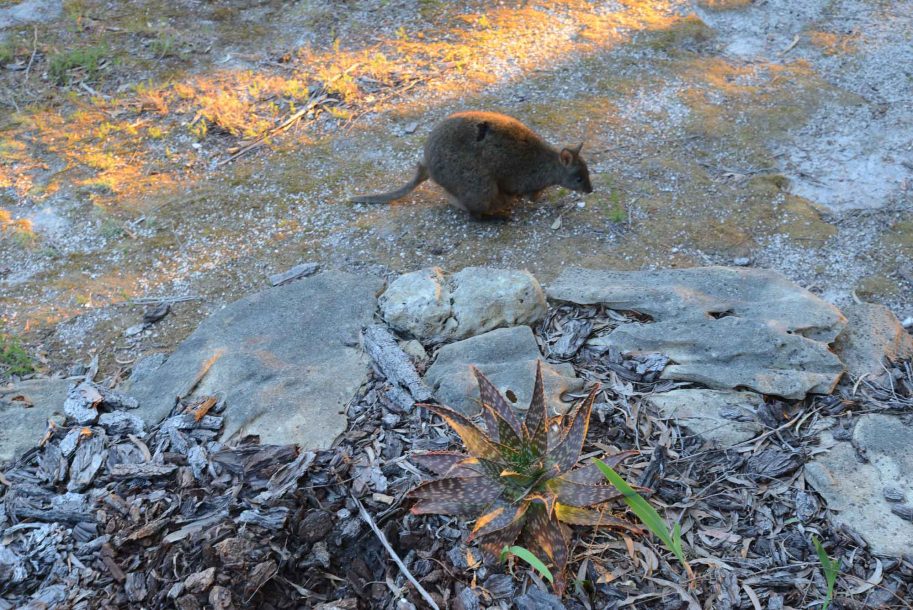 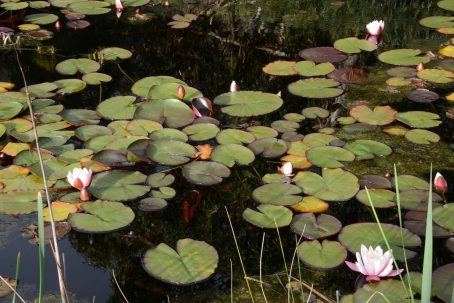 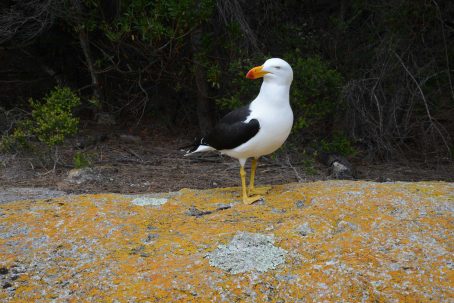 Our accommodation’s property was home to lots of Bennet’s wallaby families. They grazed meters from the deck where I drank my morning tea, joeys peeking their tiny faces out of mum’s pouch for a simultaneous mother-and-child nibble. There were wombats living on the property, along with quite a few snakes (the island is very snakey so caution in the bush is essential). The abundance of wildlife has a flipside though: the amount of roadkill is out of this world, even though we drove the 20 minutes from our accommodation to Whitemark (the main town) several times without seeing another vehicle.

Flinders generates its own wind-powered energy, and big white turbines line the roads. We thought they added a certain grandeur, and contrasted interestingly with the landscape.

Every evening brought a spectacular sunset, and the complete absence of light pollution meant stars like you’ve never seen! We stayed outside each night until the cold drove us inside, watching shooting stars and satellites go over, listening to night noises. It was magical.

Getting there by air involves taking a VERY small plane (you can’t stand up), which is rather disturbing. Our pilots were VERY young and it was VERY warm inside until we got going properly and the air-con caught up. We made it there and back again without incident though, so props to Sharp Airlines.

Funny in retrospect, it wasn’t at the time. We walked along the beach for about two hours and came to a gorgeous small bay ringed by a cliff looking out to a wild sea. It was sublime and I pulled off my shoes and socks to paddle in the foamy surf crashing onto the shore while Brian was oblivious, doing something technical with his camera. I ducked behind a rock for a ‘bio-break’, and when I re-emerged he was running absolutely panicked up the beach calling my name (which I couldn’t hear above the surf), fearing my sudden disappearance meant I’d been washed out to sea. When you hike they say you must always tell someone you’re ‘going’, and I guess that’s true for a beach-bush-wee as well if you care about your partner’s nerves.

A mix. Certainly not unfriendly, but not super-friendly, as you tend to find in small, isolated communities. Mostly farming families, non-resident yachties and fishers, a few alternative lifestylers, beef industry workers, some retired arty types (jewellery makers and wood turners and the like).

Unlike King Island to its west, Flinders Island is not a foodie’s destination, apart from the Flinders Island beef, which is a premium export product. In particular, and very frustratingly for an island in the middle of pristine ocean, there was absolutely no fresh fish/seafood to be had (our favourite). Our host said what fish was available in the island’s two pubs was probably flown in frozen from Melbourne! I guess you are meant to have a boat and catch your own. But we cooked and had BBQs and enjoyed ourselves very well.

We in Australia are not very good at acknowledging the horrible truth about colonial treatment of Aboriginal Australians. A visit to Wybalenna historic site in the north of the island challenged us to acknowledge a cruel and shameful part of our national story, which I’d never even heard about before. 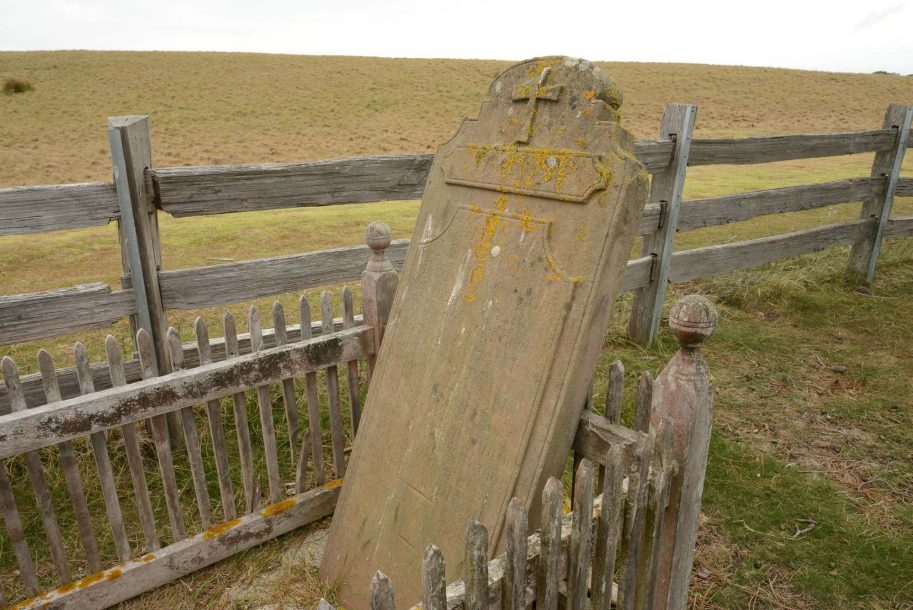 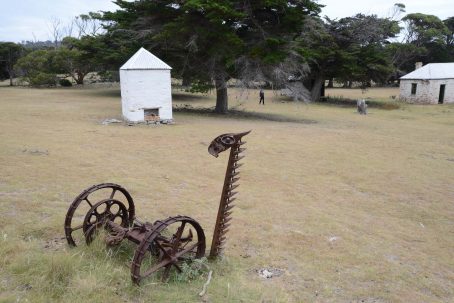 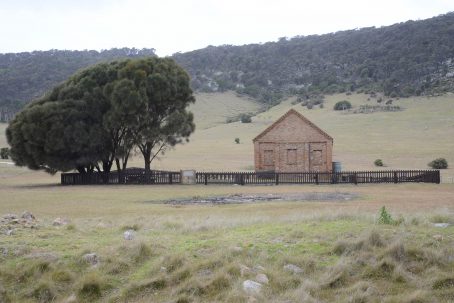 On a bleakish day we drove to this isolated, windswept valley where the 200 plus Indigenous Tasmanians who survived the so-called ‘Black Line’ massacres were exiled for their own ‘protection’ in 1835, made to wear western clothing, practice Christianity and desist from traditional ways. Settlement remains on the site include a chapel, remnants of a house, graves, and foundations of other small buildings.

Their lack of freedom, separation from country, families and children (who had been forcibly removed from them), cultural tensions within their population, disease, and scarcity of food destroyed their mental and physical health, and by 1847 there were only 48 survivors. They were removed once more, to Hobart, where they were left to ‘die out’. It was depressing, but a valuable and moving experience, one of the many relatively untold stories from Australian history.

For people who are sustained and moved by nature, who enjoy holidays living simply and being outdoors in their own company, or inside quietly by a cosy fire, absolutely.

Wine lovers should book some extra freight with flights and take some mainland supplies along, to avoid the poor quality and/or high priced over-the-bar offerings in the pubs.

Been somewhere recently? We’d love to hear about it! Drop us a line allabroadau(@)gmail.com or leave a comment below.