Middle East You've been where?

Just another ‘souk’ in Doha – sorry we just had to!

This is the fourth in our series, You’ve Been Where? In this series we turn the blog over to you to find out where you’ve been and what you thought. In this post we catch up with Kristy Mays who had an awesome adventure in Doha – despite the souks.

Hi! My name is Kristy, and I’m a travelholic. I’m an avid traveller who plans to spend all of my hard earned dollars on travel at every opportunity. Fortunately, as I am a secondary school teacher, I am able to travel quite often. Unfortunately, it is always in peak season, so travel bargains are something that I dream of knowing that they are often unattainable.

For the past 10 years I have been living in the eastern suburbs of Melbourne in Heathmont. Great suburb, great location and all around just great! I’ve always been a suburbs girl, growing up in Mooroolbark, and even when I lived in Japan, I lived in the ‘burbs rather than in the city.

This last trip was to Romania, Italy and Qatar. Sunny September in Europe seemed to be the ideal time to escape Melbourne’s weather. I was able to utilise two weeks of long service leave and add that to the two weeks of the September School Holidays for a four-week break. Our final destination, which you shall read about, was Doha in Qatar as a stopover with Qatar Airlines.

I travelled with work colleagues who have become friends over the years. Tracey and I travelled to Romania together, caught up with another colleague, Sharon, in Italy and then Trace and I finished our adventures in Doha, Qatar.

In Doha, the highlight was the Museum of Islamic Art. The building was designed by the same architect as the Louvre Pyramid in Paris (I.M. Pei) and looks like a veiled Muslim woman from afar. It is an amazing building and the artworks inside were stunning.

As Qatar is a relatively ‘young’ country, most of the art works were from other Islamic countries: Egypt, Iran, Iraq, Turkey and so on. While we were there, an exhibition on Muhammad Ali was being shown and we were able to see memorabilia of his visits to Qatar. Clearly his visit had quite an impact on the Qataris and there were a range of signed items on display.

As well as priceless jewels and weapons, there are ceramics and manuscripts and a real variety of treasures from all over the Islamic world. Having come from Italy we were a little ‘museum/art gallery weary’, but this museum offered us not only the welcome cool from the Doha sun and humidity, but a real insight into Islamic art. Not something we knew much about prior to our visit. 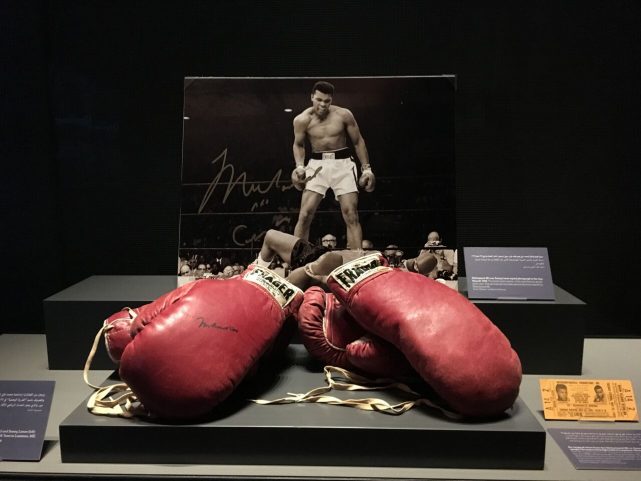 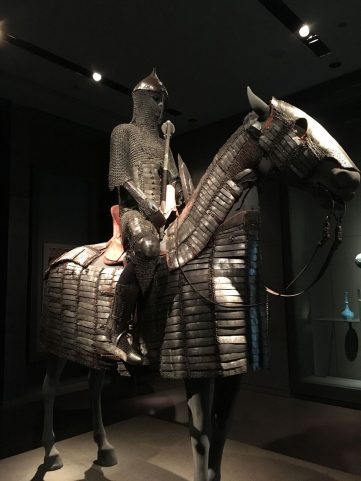 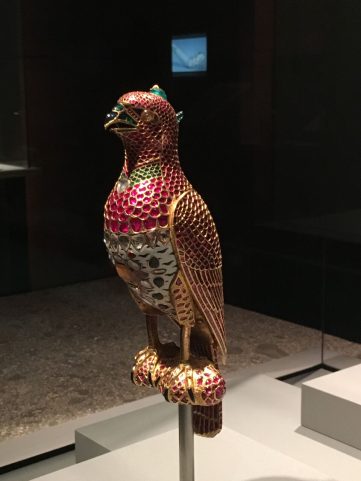 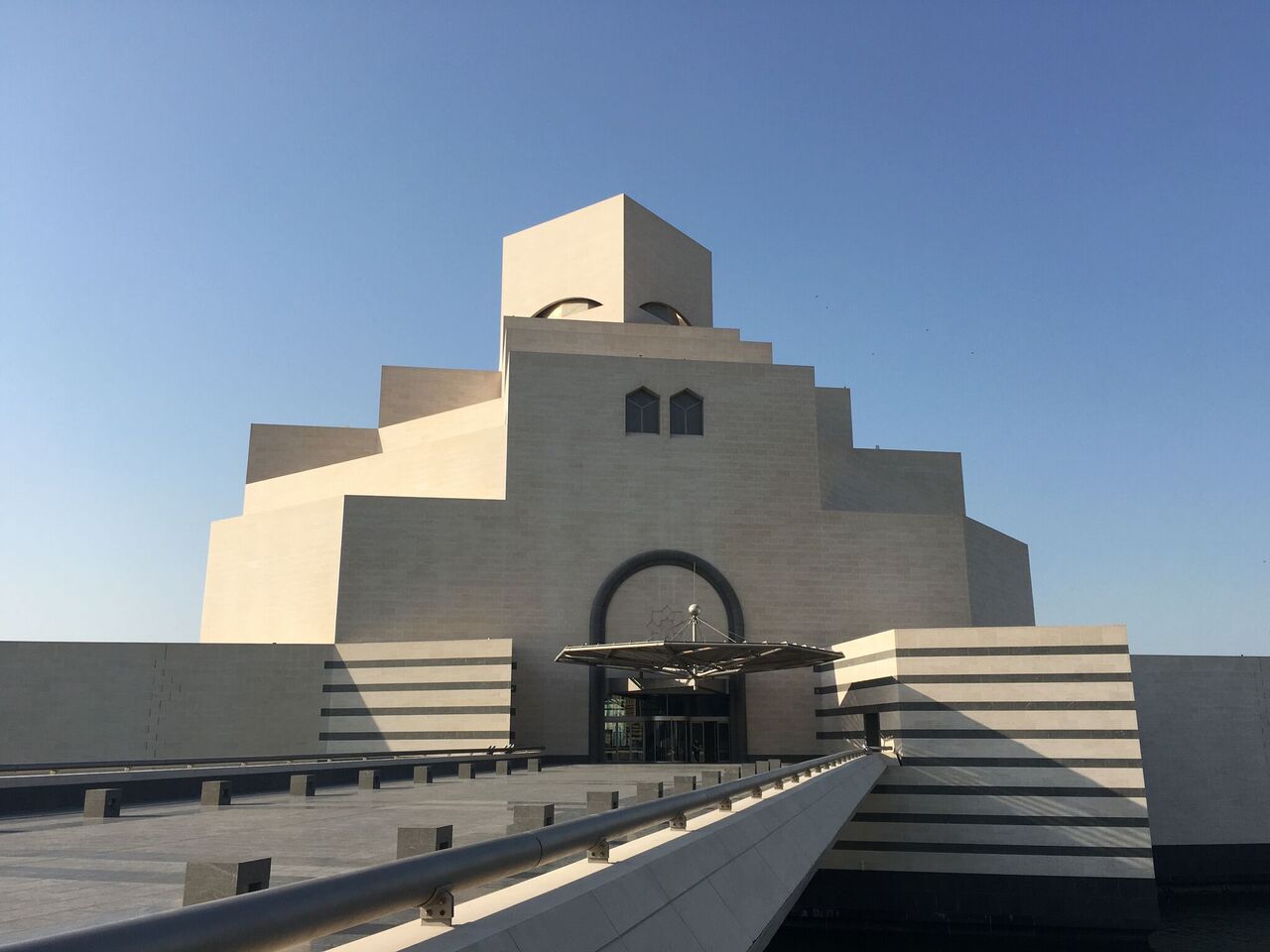 The top of the Museum looks like the eyes of a woman covered by a burqa.

The other highlight was being able to split up our journey and to spend some time relaxing by the pool at the Doubletree by Hilton in Doha. We were expecting a dry heat, but it was SOOOOO humid. Being able to laze by the pool and do bugger all after a pretty hectic three and a half weeks of travel was a highlight. We were going back to work and the exam/report writing period of our year, so this was an ideal chance to relax and refresh.

I was really disappointed with the souks (markets) in Doha. In anticipation of buying lots of bits and pieces, we had left space in our overly stuffed bags when leaving Italy in the hope of snapping up some bargains. Most of the stuff for sale was of average quality and seemed to have been imported from China: cheap plastic sandals and toys. Although the falcon souk was groovy with all of the falcons being bought and sold, the rest of the animals were outside in scorching temperatures in tiny cages. It was depressing and cruel. We saw some dead animals that were caged and it was not a great place to be visiting. Not for us at any rate. 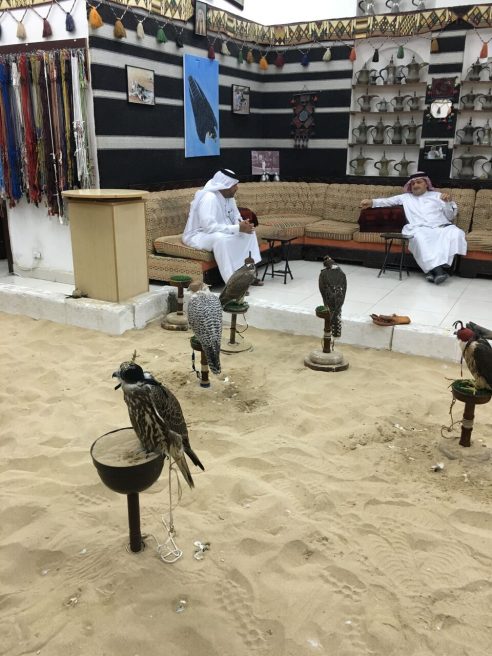 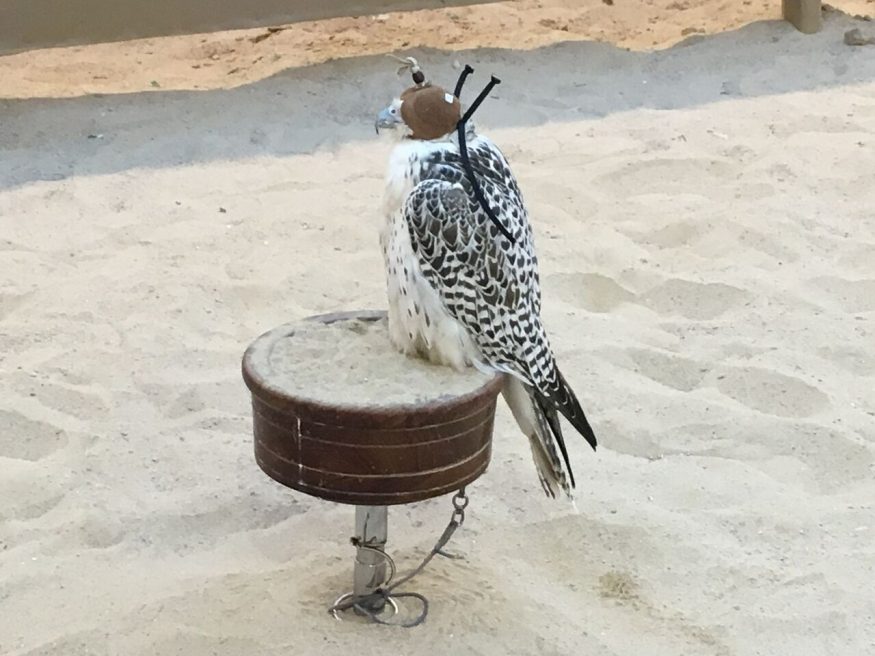 At least the falcons seemed to be well looked after….

Other than Tracy being mistaken for my mother? She is about 13 years older than me…..eeek. Well our Sri Lankan guides who took us on our city tour thought I was hilarious. They were talking about the Emir and his three wives and how they all receive a flash house and car and I suggested that it wouldn’t be too bad to be a wife. I mean you’d only have to put up with him once a week or so for your ‘wifely duties’ and then your time would be your own. Put down on paper, it doesn’t sound that funny…but the driver especially kept bursting into laughter every five minutes or so and having a giggle, “once a week” apparently really tickled his fancy.

Hard to say actually as we didn’t really meet any. The ‘local population’ is mostly made up of a range of ex-pat workers. We met Sri Lankans, Indians, Bulgarians, Egyptians, Russians, and more in our couple of days there. All of them were very friendly, but then our dealings were with people working predominantly in the hospitality industry. However, all of the people we came in contact with were warm, friendly and happy to chat about what life was like living in Qatar. Basically they work long hours, eat sleep and repeat. The money that they earn is sent home and they often only have the opportunity to return home once a year, although the norm seemed to be once every two years.

Fantastic. We had gorged on pasta (alright, I had) throughout Italy, so it was great to eat some different foods. Our feast of tabouli, hummus, tzatziki and eggplant dip, washed down with iced lemon mint and a sneaky shisha was a highlight of our last night. The rooftop bar at the Doubletree was a popular venue of a night time; it’s one of the few places that people seemed to be able to drink alcohol. 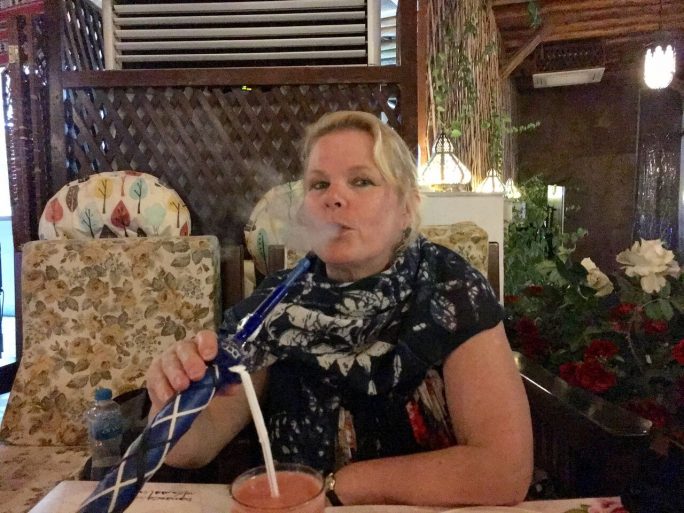 Tracey on the shisha pipe 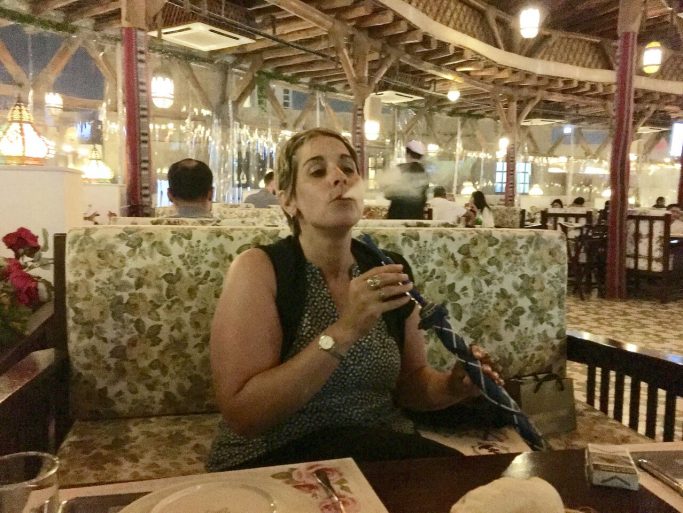 After speaking to the workers in Qatar and hearing that they often work for around two years before being able to head home and see families or at the very least only once a year, it made me appreciate, not for the first time, how lucky I am. I’m able to travel on a regular basis both domestically and internationally and am fortunate that my salary is such that I can do that. Oh. And that I get decent holidays and am able to access long service leave. Being away often makes you appreciate how good you have it at home!!

Yes. I think it is great to be able to experience such a different culture with the added bonus of splitting up your trip on the way home from Europe. Oh. And the food was amazing!!

The Doubletree by Hilton in Doha provides you with a warm cookie on arrival (although in 40 degree heat, it’s debatable as to it being the best arrival snack), a heavenly scented hotel, an awesome rooftop bar with a great pool and the opportunity to be horizontal before embarking on your homeward journey.

Also, it is an Islamic country: be aware of your dress. Although Qatar is pretty progressive, you need to have shoulders covered if you are a female when entering the Museum of Islamic Art. Wear light and comfortable clothes so that you are not any hotter than you need to be.

You will need to pay for a visa when you arrive. The arrival hall is pretty empty (I think we were two of about 10 people who did not head to the transit lounges), so it is a quick process.

Most importantly, as is the case no matter where you are travelling, have fun, try new things and get outside and explore where you are. With sunscreen. And a fan. Actually, go in a car: you’d be a fool to try and walk the streets!

Travelled somewhere recently and want to tell the world about your trip? Drop us a line for your chance to be featured on AllAbroad. 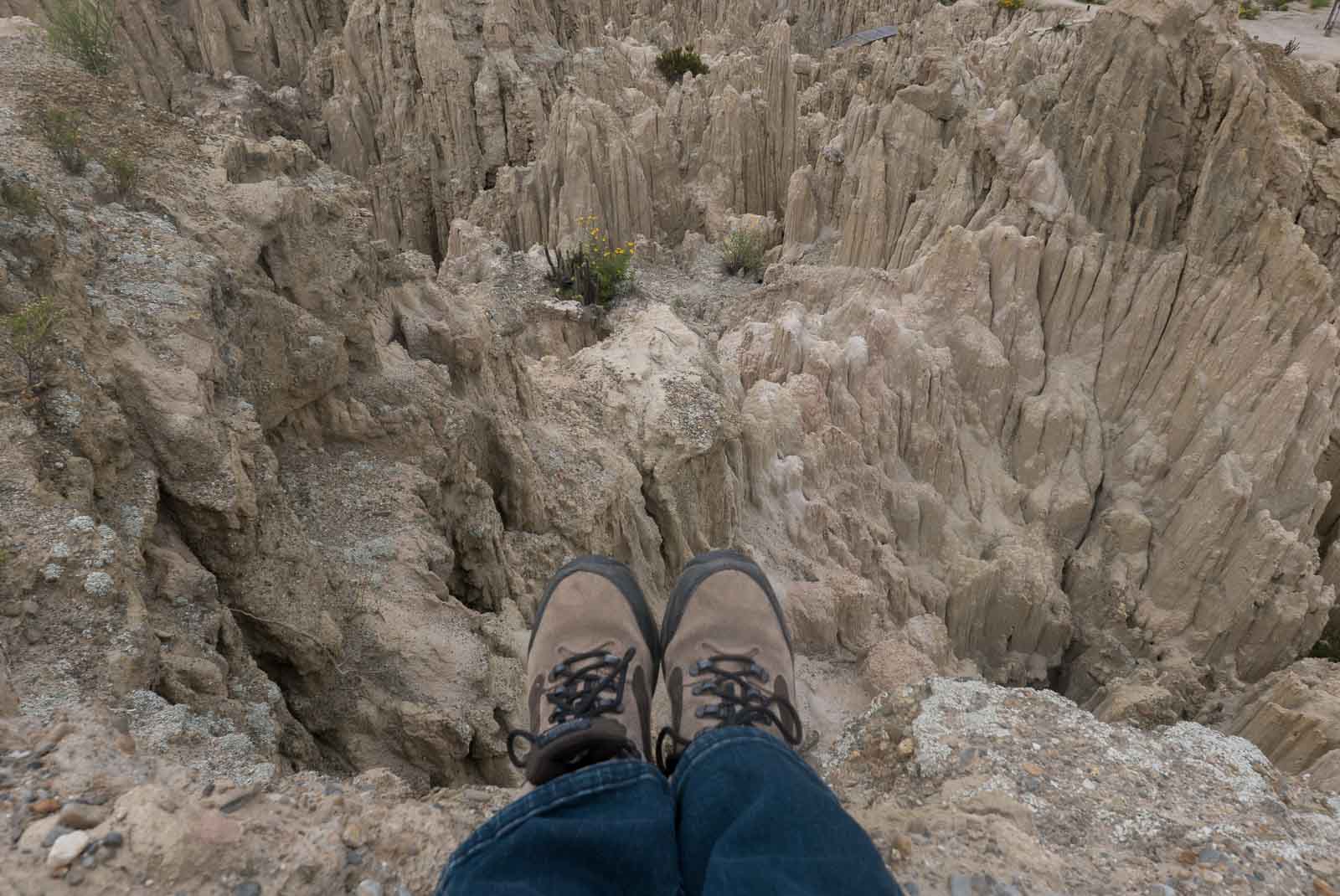 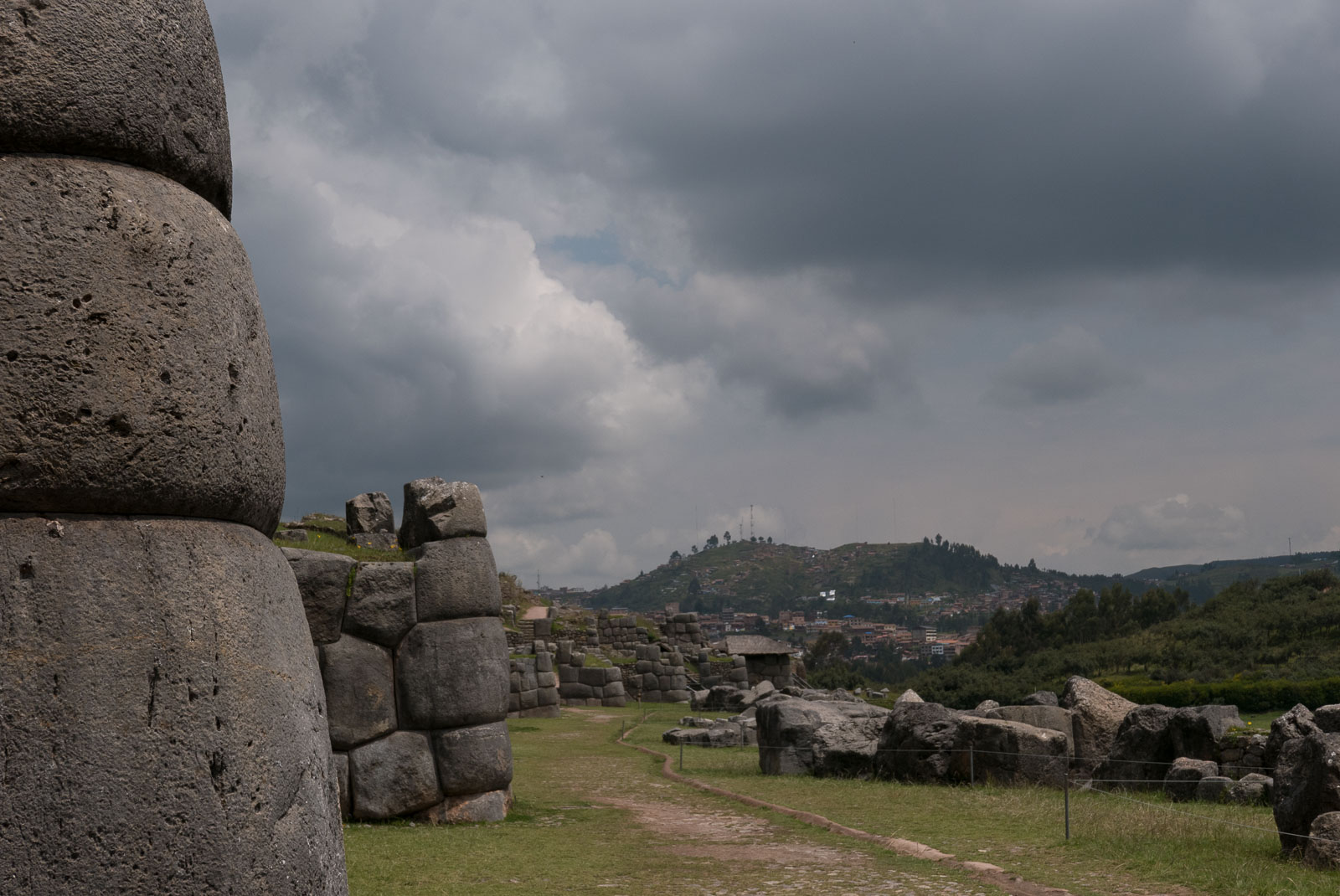 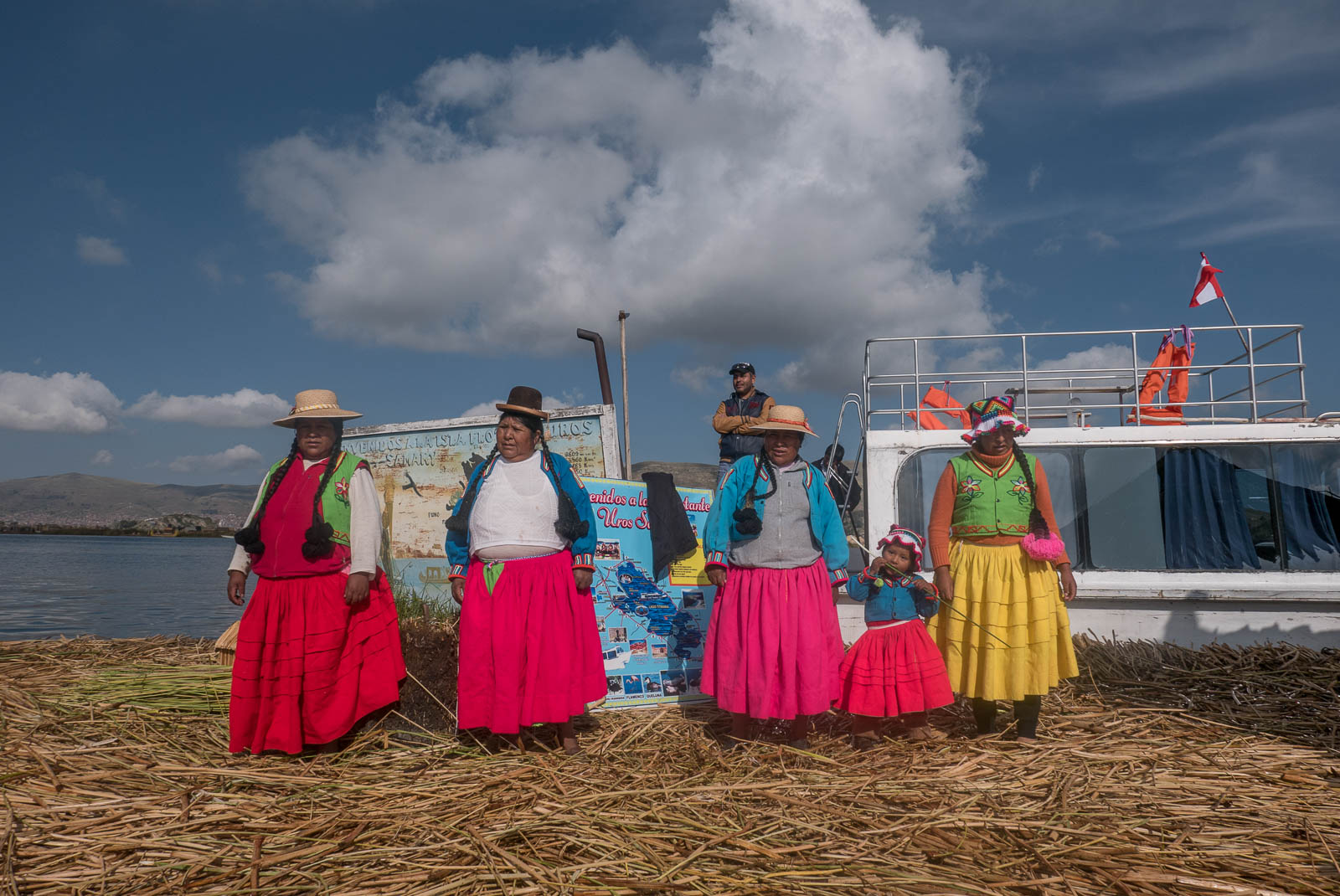