Swinging through the clouds in Chamonix

So we finally made it to the very reason we had decided to come to this part of the world – Chamonix. And we weren’t disappointed.

We knew it was going to be something special, the train ride from Martigny began the ascent into some pretty amazing mountains – the sheer drops on the side left me a little nervous here and there, but nothing compared with what was to come!

The small train (the “Glacier Express”) – three carriages – took us through the forest and above us we could see the snow-capped mountain peaks.

Chamonix is a small town, though larger than I had thought it would be. We stayed just outside the town centre at Chalet Les Frenes in Les Bossons. 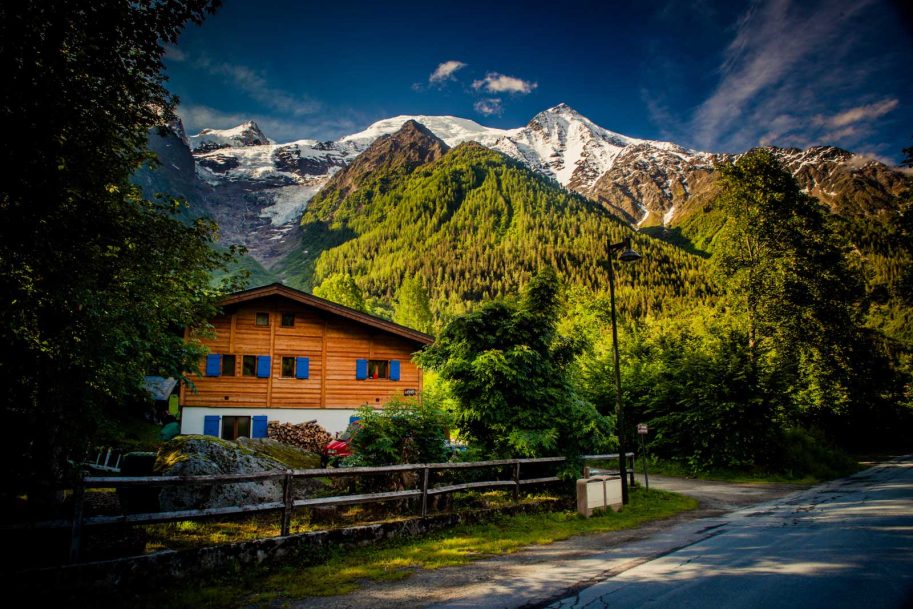 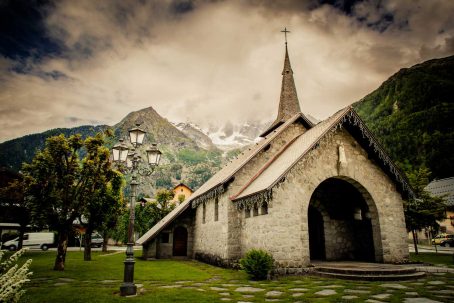 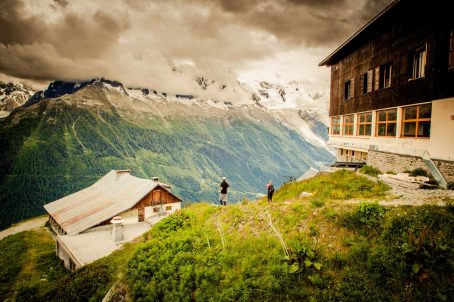 The Bed and Breakfast/hostel is nestled at the foot of Mont Blanc and has amazing vistas up to the alps. There is also an outdoor hot tub with views across the mountain range so be sure to take your togs!

We caught a brief glimpse of Mont Blanc our first night as the clouds parted for a few seconds and the mountain showed its peak.

The next day was cloudy, but after a quick look through the main town, we took a chance that the sun would come out and headed up La Flagere at 1894m. From here we walked four hours return to Lac Blanc at 2352 metres – yep it was all uphill. This was one of the toughest walks we have done, but well worth it. Though as it started to rain we did contemplate turning back a number of times.

As we wandered around the lake – photographing it from every angle of course, we saw two Ibex just off in the distance. We saw two more, right next to the path as we were on our way back down the mountain.

The walk took us up into the snow line and the sun came out just as we were at the lake. The views across to the Mont Blanc mountain range were awe-inspiring, even with the clouds, and we can only imagine how spectacular that view must be with blue skies. 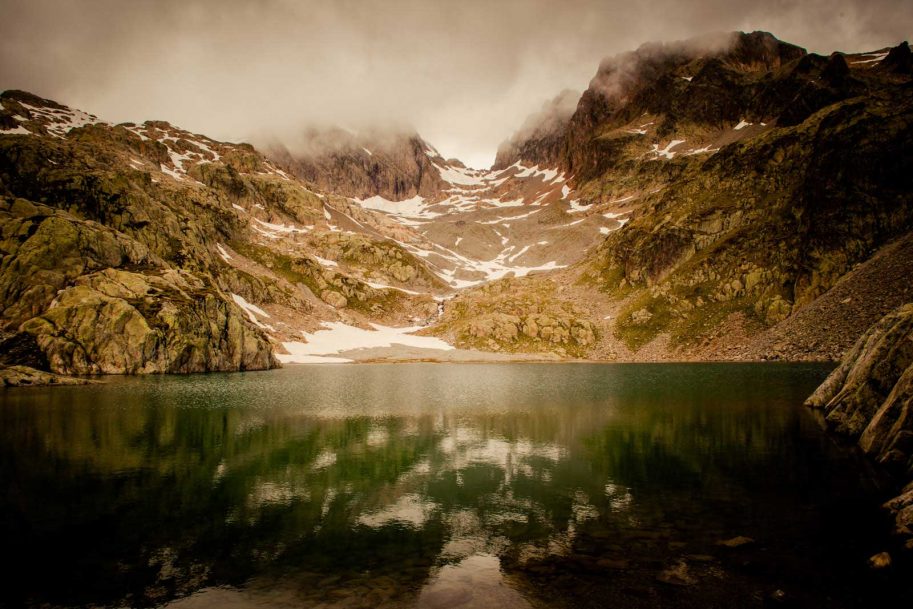 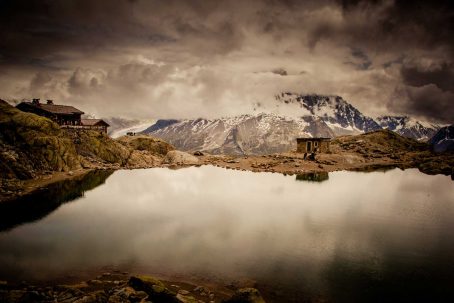 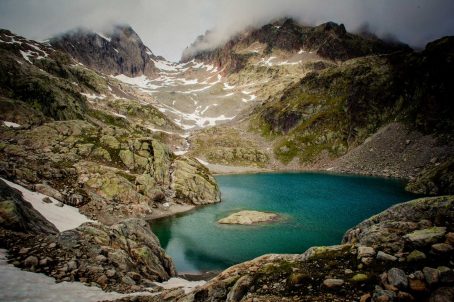 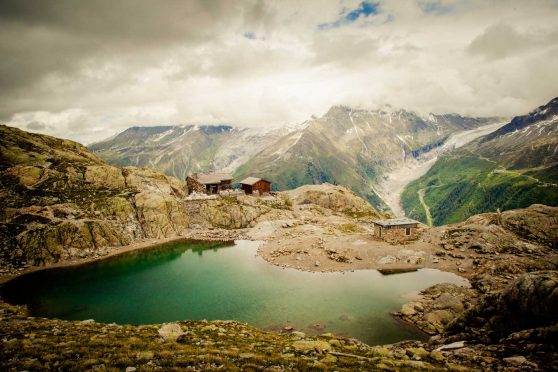 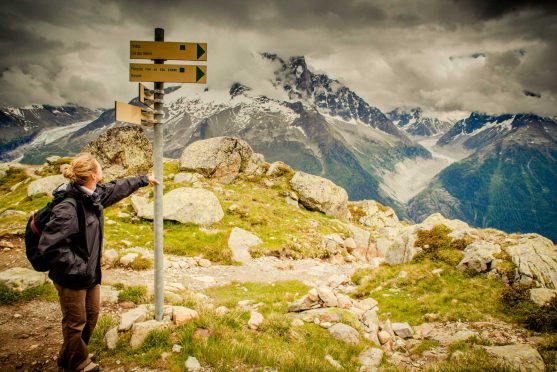 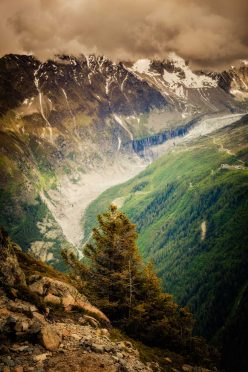 The following morning we were up and ready for our journey through the mountaintops and into Italy.

All I can say is WOW!

We owe a special shout out here to John Man and Chris Schuler and their book The Travellers Atlas – it was here that we first read about this amazing journey.

We headed up to Aiguille Du Midi at 3842m. The clouds hovered over the mountains opposite, but we had clear blue skies above us and could see down into Chamonix below. The views were awe-inspiring, dramatic mountains all around us.

But it was the trip from Aiguille Du Midi across to Helbronner in Italy that took my breath away. The journey saw us suspended in the air swinging in cable cars on top of the world. The journey lasted about half an hour – including regular stops so that we could adequately photograph the mountains around us – oh and so passengers could get on and off. From here we could see the Mer De Glace, Mont Blanc and the Swiss, French and Italian alps.

Below us we could see those souls silly, I mean brave enough to tackle the harsh conditions wandering across the barren landscape, and the crevices and rock faces they would have to tackle.

The cable cars themselves travel in threes, with two people in each car, it’s an eerie feeling to be in such a quiet car suspended between the mountains.

The trip into Italy was the most amazing entrance we have and are ever likely to make. 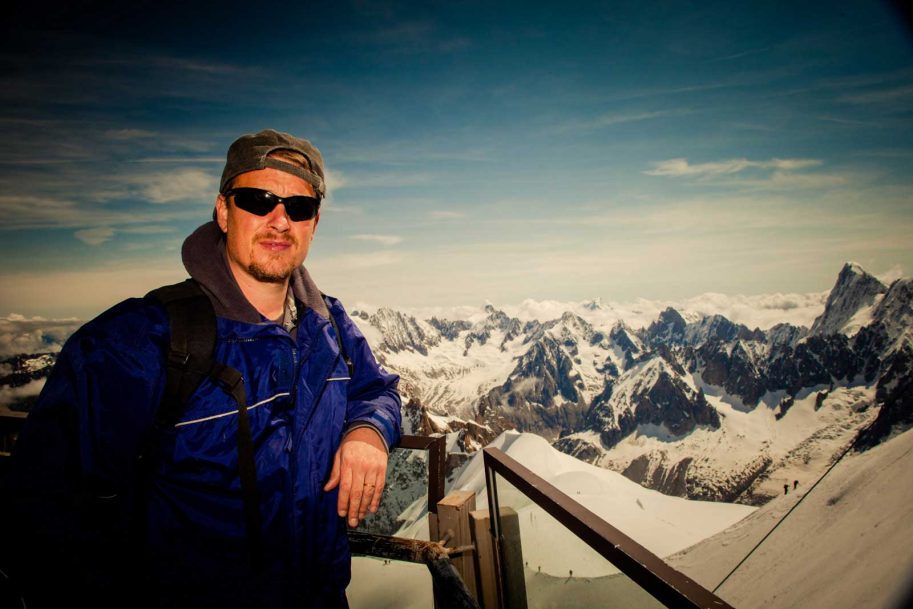 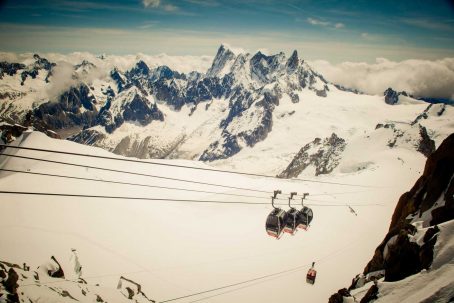 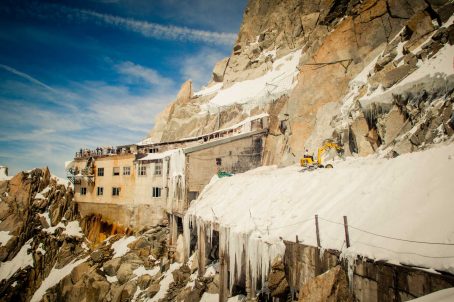 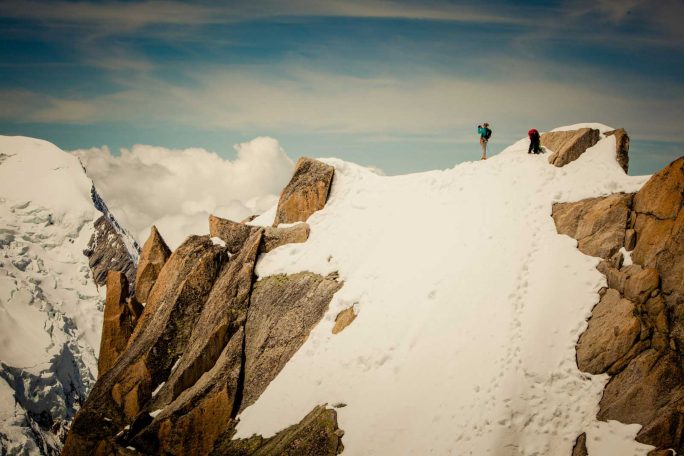 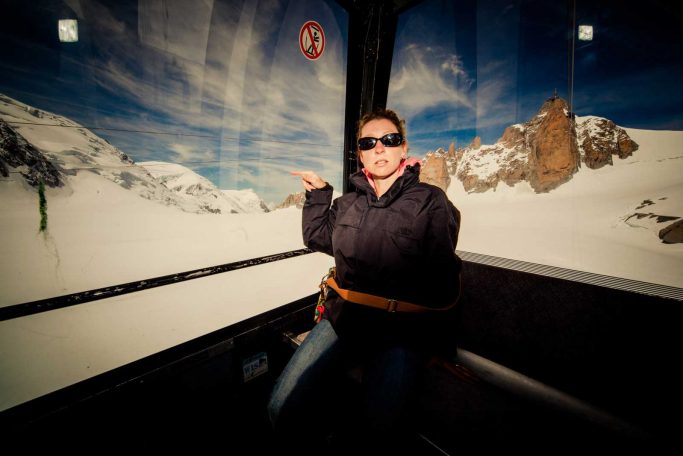 After swinging through the mountains from Chamonix, France, we arrived at Helbronner – officially on the border of France and Italy at 3462 metres.

From here we took the cable car down through Rifugio Torino at 3335 metres, Pavillon Du Mont Frety, at 2173 m and into La Palud at 1370m.

Finding accommodation wasn’t as easy as we thought it would be. There was no information bureau in La Palud, and the first three hotels we found were all closed, just as we were starting to get a little nervous we found Albergo Funivia, just at the foot of the cable car. We can’t speak highly enough of this hotel – a charming place with two lounge rooms for guests, good, clean rooms and most importantly very friendly and helpful staff.

We arrived at about 3pm and were told of a lovely pizzeria that had an arrangement with the hotel for dinner. We waited around only to find that the pizzeria was not actually opening that night – we hadn’t had lunch, so were quite hungry by this time.

After telling our hosts of our predicament they drove us into Courmayeur for pizza and gave us their number to ring them when we were finished. 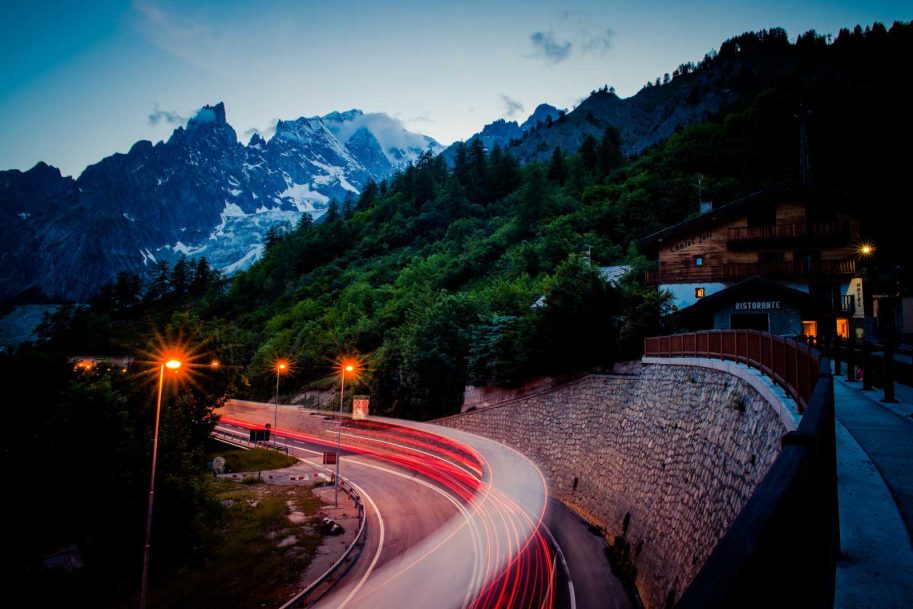 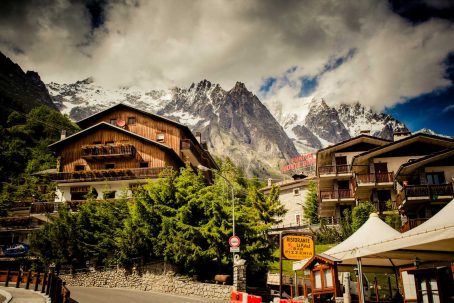 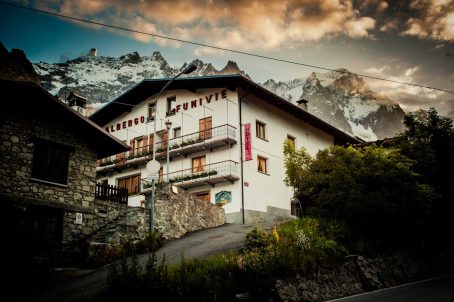 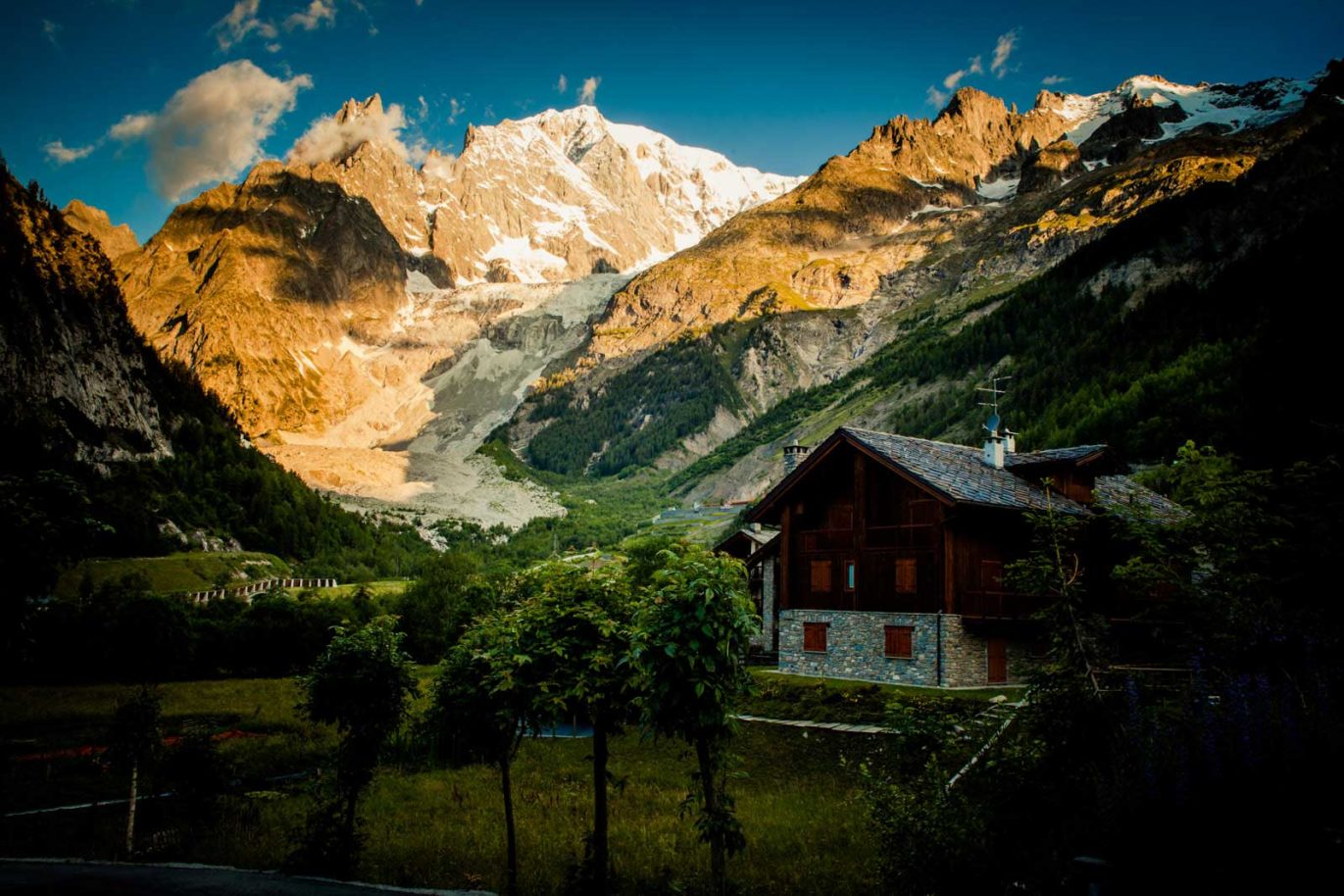 Dinner was at Pizzeria Ristorante Du Tunnel in the heart of Courmayeur. Ade had one of the biggest pizzas I have ever seen –and it was the small, there was a gigantic that was, as you’d expect, huge! I had gnocchi bolognaise, both were fantastic and the girl who served us couldn’t have been more helpful.

Courmayeur, like La Palud, was almost like a ghost town, very few restaurants nor hotels appeared to be open, while the pizzeria we were in was packed, there were very few people in the streets. This was a stark contrast to Chamonix, where all the roads had been packed – tourists everywhere!

Our host told us on the drive back to our hotel that the season didn’t actually start until next week, so most places were still closed until the official start of the season. Interesting that the seasons in Italy and France – at either end of the cable car from du Midi to Helbronner don’t coincide! It’s hard to say which side is more stunning. While we had heard a lot more about Chamonix, Courmayeur, and La Palud are also both stunning towns, and the mountains look just as impressive.

We stayed at Chalet Les Frenes in Chamonix and Albergo Funivia in La Palud.

We were in Chamonix two nights and La Palud one night.

Was it long enough? We didn’t really get to explore Courmayeur in Italy so could have done with one more night there, and we could have spent a lot longer exploring the various walks in Chamonix. But overall, this was the perfect amount of time to do the crossing we wanted to do and explore the region.

Highlights: The crossing from Chamonix into La Palud was one of the most amazing things we have done on any of our travels. I can’t recommend it highly enough.

Scroll down to see next article
Switzerland

Hiking in the mountains at Lauterbrunnen