Getting lost in Florence and the sweet goodness of Gilli’s

I’m caught, stuck. I know I should be ordering a roll, something healthy for lunch, but the cakes here just look so good. Florentines, cream filled buns, boiled sweets, cannoli, chocolate covered biscuits…

I’m standing outside Gilli Patisserie – one of the most famous patisseries in Florence dating back to 1733 – with four of my tour group members and we’re starving. And this is one of those European patisseries; you know the kind. The kind with the olde worlde facade, windows full of sweet goodness and wide and deep timber and glass cases inside chocked full of more food. The kind of store that whispers to you enticingly as you wander past – come in, come in… 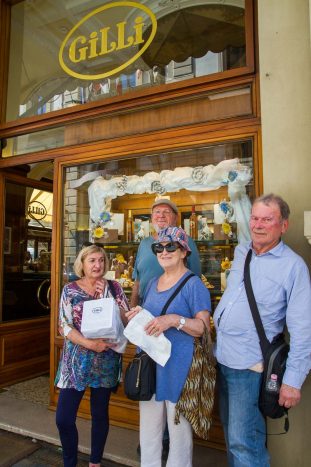 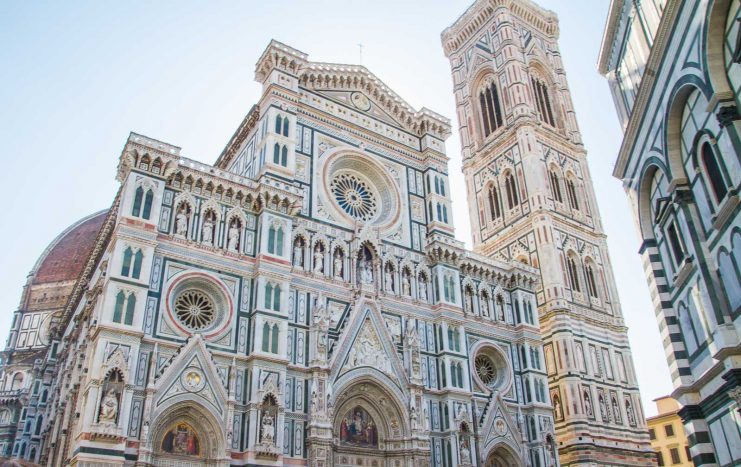 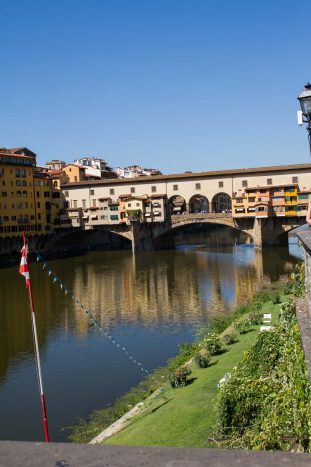 We’ve just spent the morning walking through Florence, up and down narrow winding streets. It’s not easy. Florence is busy, really busy, and I discovered early that if you get too far away from your guide, the supplied earpiece will pick up any number of other guides in the vicinity. Suddenly I was hearing all about the Duomo in Japanese, Italian, German and American English – not the English I was meant to be hearing.

It’s my second time in Florence and yet it may as well be my first, I’m completely lost, or at least I would be without our trusty guide showing us the way.

The Duomo sits at the centre of Florence and is every bit as big and brash as you would expect. Building of the cathedral started in 1296 and wasn’t completed until 1436. it is said to be the fourth largest Cathedral in the world. And it’s impressive – both inside and out. The massive terracotta topped dome and soaring bell tower dominate the Florence skyline. And up close, it’s beautiful. Covered in white, pink and green marble and ornate statues, ornaments and doors, it’s a visual feast. 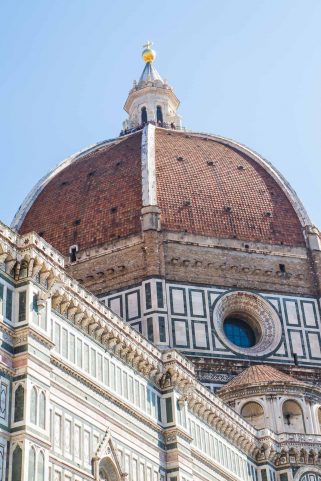 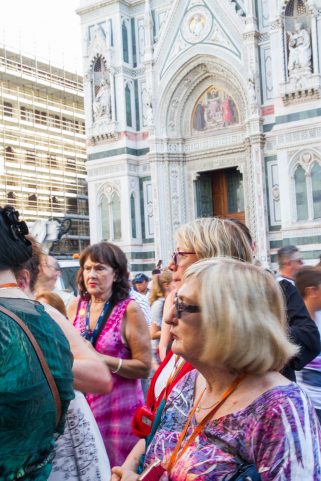 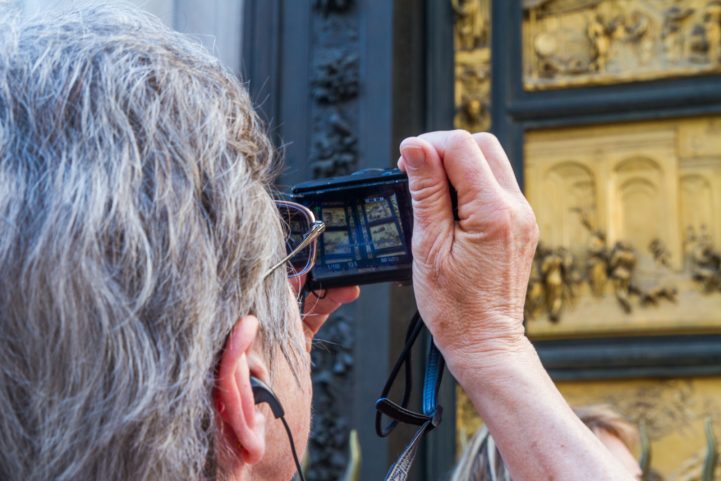 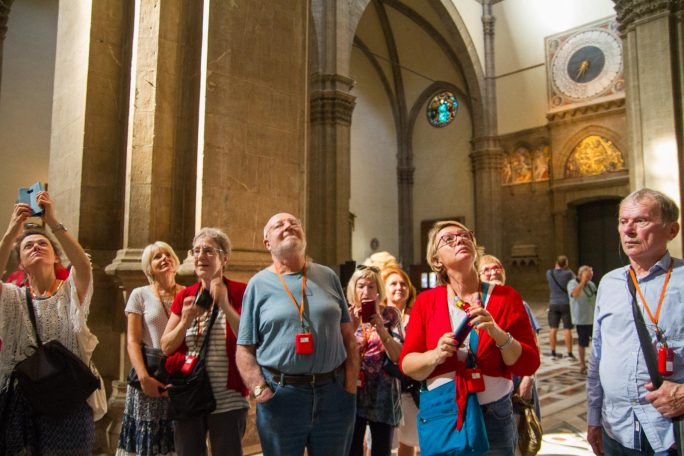 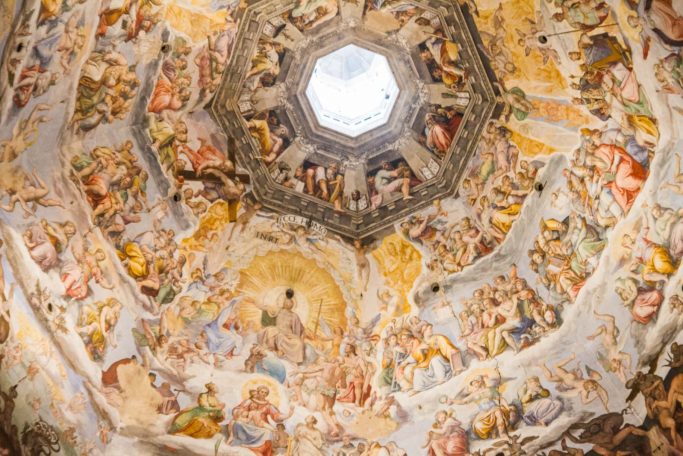 In contrast the interior is rather sparse, but it’s still well worth a look and still very beautiful – and if that’s not enough to entice you it provides a welcome respite from the heat outside.

As large and imposing as the Duomo is, once you’re caught in the labyrinth of the surrounding streets, you’ll forget all about it, until that is you need it as a reference point to work out where you are. But by that time, chances are you won’t be able to see it and you’ll soon become distracted again by the romance of the laneways around you.

The old streets of Florence weren’t made for cars, and the city has gone one step further by establishing a Limited Traffic Access Zone in the major tourist spots. So while there are hoards of people, you won’t have to battle with cars here.

Aside from the beauty of just wandering the streets, Florence is renowned for its artwork. The Uffizi and Accademia are among the most famous galleries in the world. The last time I was here we visited the David at the Accademia, sadly it’s not on our itinerary this time. It is one of the most impressive pieces of art I’ve ever seen. The sheer scale and detail in his physique is remarkable. There are a number of replicas of the David around the world, including one in Piazza della Signoria – the site of the original David – and one in Piazalle Michaelangelo overlooking Florence. And I make do this time with checking out both of them. 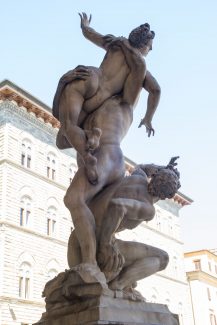 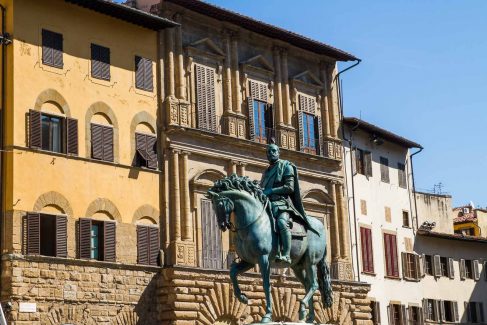 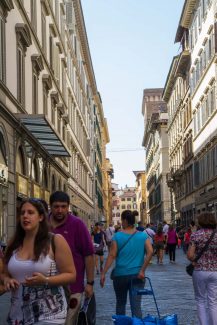 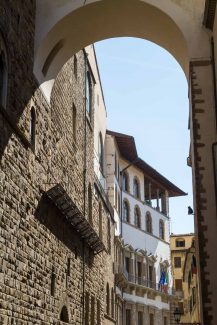 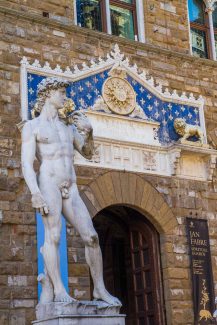 The Piazza della Signoria is one of the most significant squares in Florence, set under the gaze of the Palazzo Vecchio, it’s full of interesting and important statues and sculptures. A real open air gallery. Incidentally it was the birthplace of the Bonfire of the Vanities in 1497 as well as the site of the return of rule by the Medici in 1530 after the Florentines had overthrown the family’s rule in 1527.

Look out for the contemporary bronze turtle in the middle of the square – an interesting addition to the renaissance art that surrounds it.

We wander along the Arno to gaze out over the Ponte Vecchio, once the only bridge over the river, the current bridge was built in 1345 after a great flood. Now it’s one of the most photographed sites in Florence, so of course we have to wait a good while for a woman to get just the right selfie in just the right spot in front of the bridge.

But the real fun comes the following day, when my tour group takes to scooters to explore the Tuscan countryside. We’re given a quick briefing – which basically amounts to wear your helmet and listen to your driver – select our vespers and then we’re on our way. The tour starts in the centre of Florence, so we get to feel like real locals, winding our way through the city streets – our drivers point out the local landmarks, ie the best gelati shops. Then we make our way up into the hills. Our first stop is Piazzale Michaelangelo to check out the views back across the Florence skyline – not surprisingly the Duomo steals the show. We are only slightly distracted by the gelati competition that is taking place in the square…

Soon enough we’re back on our bikes and heading into the countryside, winding our way through small towns, past vineyards and the iconic rolling hills of Tuscany. Every cliché comes to mind as we travel in the most Italian of ways through the most Italian scenery.

So you see, I really did earn the cake and rose water sweets that I chose after the salad sandwich, of course, at Gilli Patisserie.

We stayed at Terre di Baccio in Greve di Chianti.

We were in Tuscany for five days with various visits during that time to Florence.

Was it long enough? Florence is a beautiful town and staying in Greve di Chianti, just a 40 minute drive, away meant we were well positioned to see the other lovely towns throughout the Tuscan countryside. But I would recommend at least three days in Florence alone.

Highlights: The Duomo for its sheer scale, Gilli Patisserie to feed my sweet tooth, Vesper riding through the hills, the views from Piazzale Michaelangelo.

*My stay in Florence was part of a tour I hosted for the Australian travel company Two’s A Crowd.