We’ve all seen those images of Tuscany – you know the ones, emerald green mountains, mist rolling across the vineyards and medieval walled cities nestled into the countryside. And you’ve thought to yourself, I must go there.

But where exactly? Tuscany is a sprawling region that spreads across Italy. There is so much to see from the coastal towns to quant vineyards and world-renowned artwork like Michelangelo’s David.

Florence is a must-see on any trip to Tuscany but here are five, ok six (I couldn’t narrow it down any further!) towns also worth a look.

Let’s be honest, you go to Pisa for one thing – to see that marvel of Italian stuff-ups – the Leaning Tower.

But there is more to see than just the tower. I like to think of this place as a deconstructed church. There is the cathedral, the mausoleum and the bell tower – all separate, but all side by side.

While it’s the bell tower that hogs all the attention, each of the buildings are striking – think gleaming white marble set amidst bright green manicured gardens. 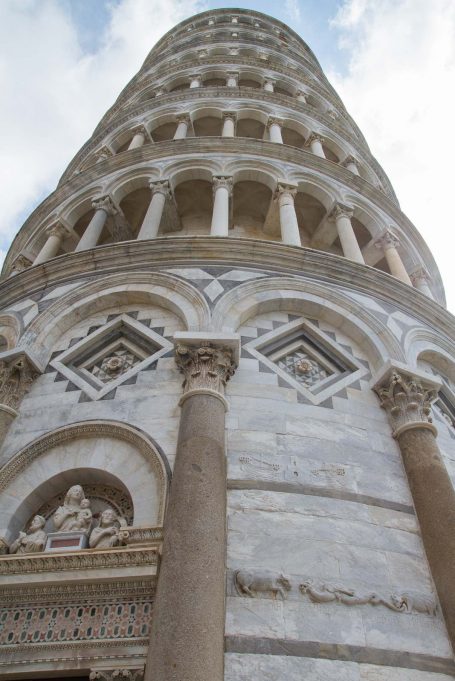 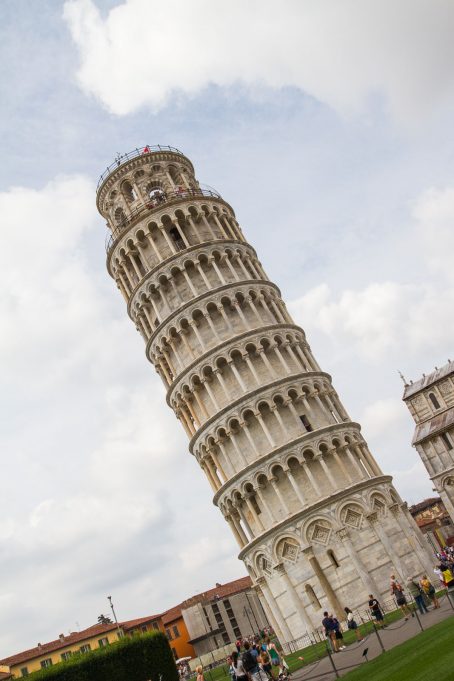 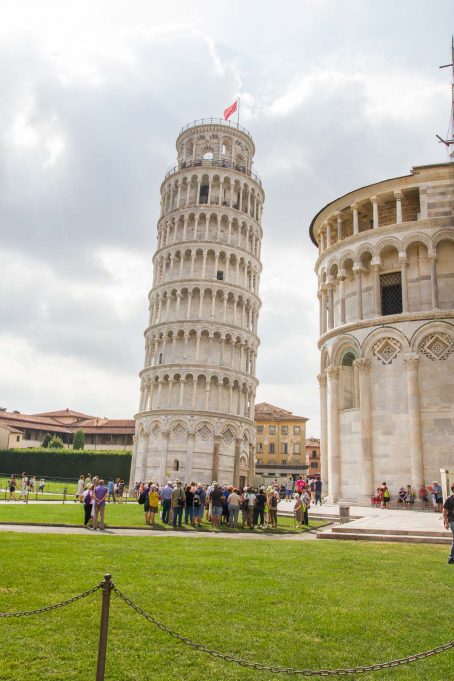 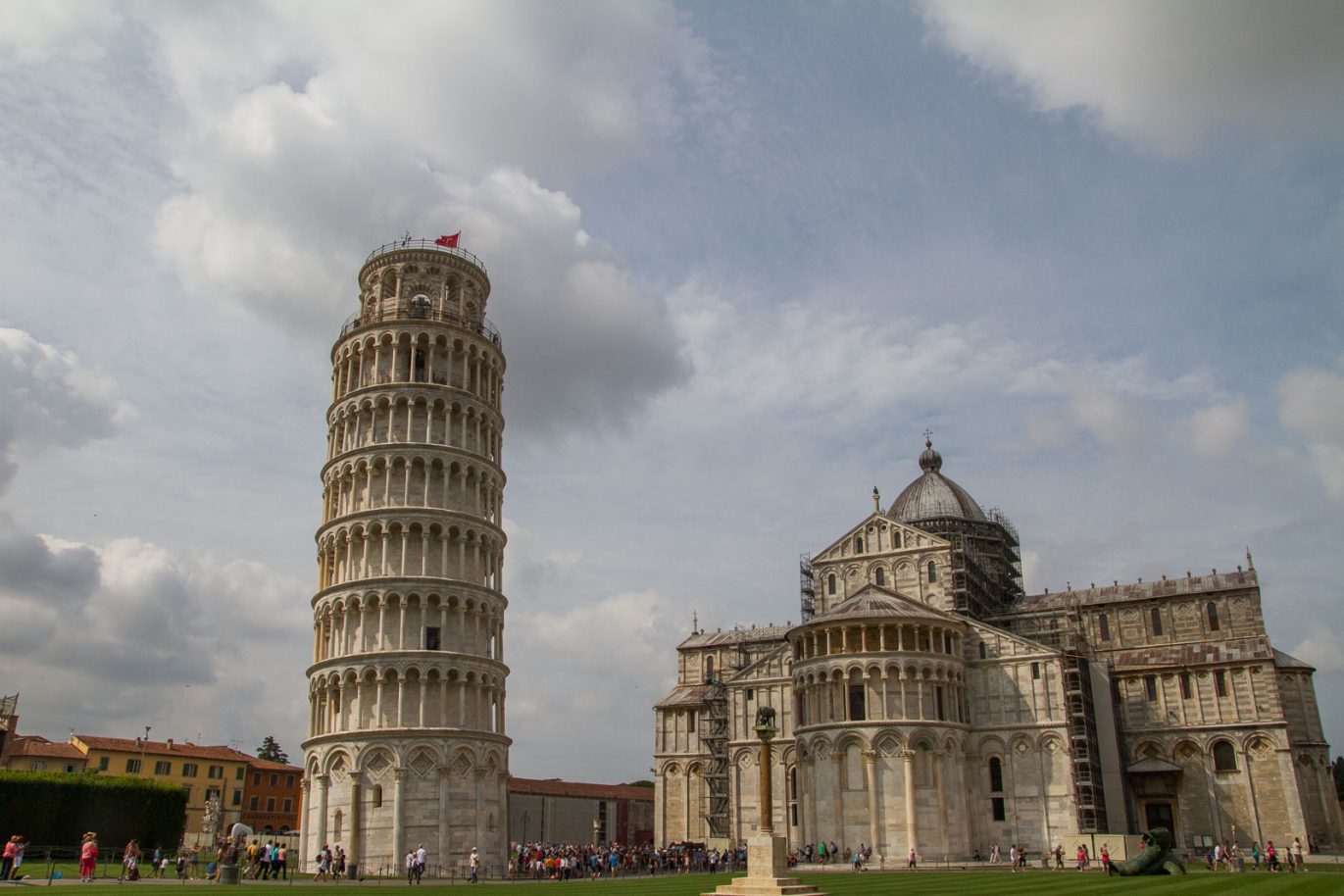 Pisa is a tourist hot spot – it attracts the crowds and everyone wants that photo of themselves holding up the tower (you can try and resist it, but you will succumb).

And with the tourists come the touts, selling every kind of souvenir imaginable. But it is worth a stop on your trip through Tuscany – just be aware the road in can get very busy!

We stayed at a vineyard in Greve in Chianti so I admit to having a real soft spot for this place.

The town square is small, and very quaint, but it is packed with restaurants, cafes and shops.

The town centre is nestled into a gully and is a little larger than many of the nearby villages in Tuscany.

If you’re lucky enough to be here on a Saturday don’t miss the market – a real meeting spot for locals selling all kinds of wares – and look out for the giant chicken in the mainsquare, the symbol of the region.

When you think of Tuscany, you’re really thinking of some place like Montefioralle.

About a half hour walk from Greve in Chianti this quaint little village transports you back to medieval days.

And when I say little, I mean little. There is one curved mainstreet that winds its way around the town cathedral. The cathedral, sitting on top of the hill, takes centre stage as the main hub for the locals.

We had only been in the town about three minutes when someone stopped us with an offer of wine tastings. Alas it was only 11am and too early for wine – even for us. 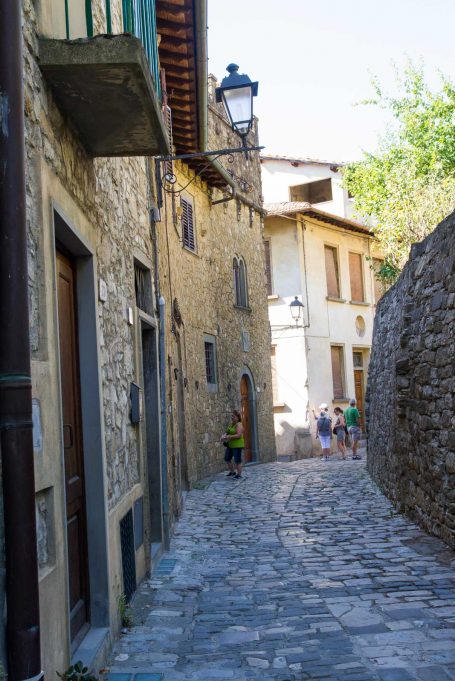 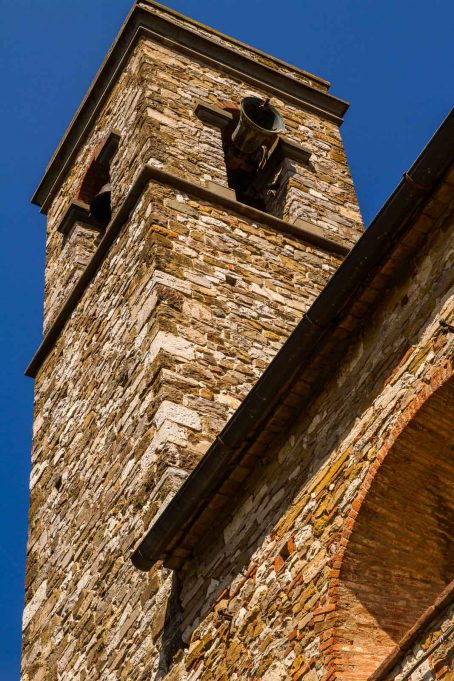 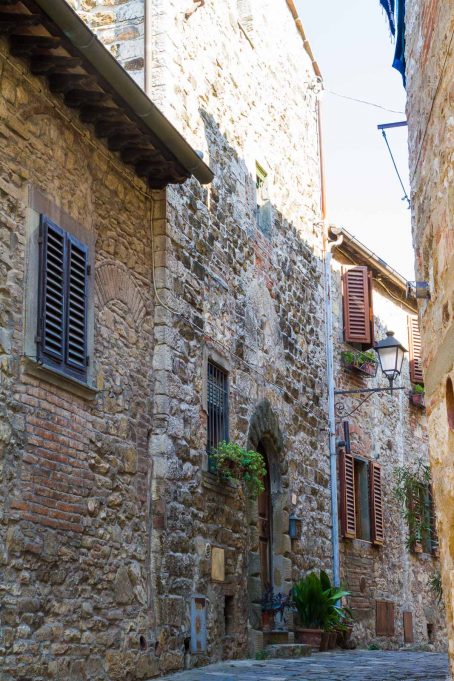 Instead, we settled on a beer in a very quiet little bar/café. The bar sells very cheap alcohol and has stunning views out over the rolling hills of Tuscany from a little room out the back.

Montefioralle sits on top of one of the larger hills in the Greve di Chianti region in Tuscany. Back in the day it held a prominent position in the feud between Sienna and Florence.

But in 1250, when the feud settled down it lost its stronghold and many of the locals moved into nearby Greve.

Fortunately it lost none of its charm. Be prepared for a steep climb if walking from Greve and look out for the little cemetery nestled on the side of the hill on your way up.

There is so much to see and do in the very pretty town of Siena that it really needs a post all of its own. Bigger than most of the other cities mentioned here, Siena features stunning building after stunning building and a series of lovely piazzas.

It is famous for the palio race, held each year in the Piazza del Campo. The 17 contrades – neighbourhoods – each vie to race in the competition. Only 10 are allowed each year. Competition gets fierce and it’s a great honour to win.

Also look out for the intricate street lights on the sides of the buildings and don’t miss the Duomo.

Siena is a very hilly town- even the central piazza is on a slope. And there are many small cobbled streets to explore, so be prepared to walk! 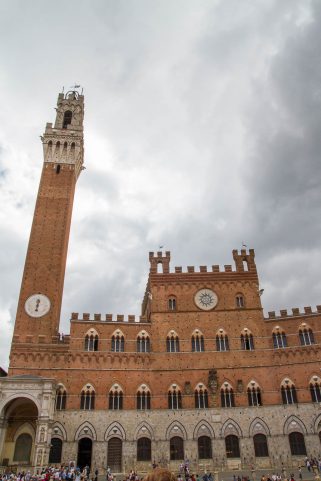 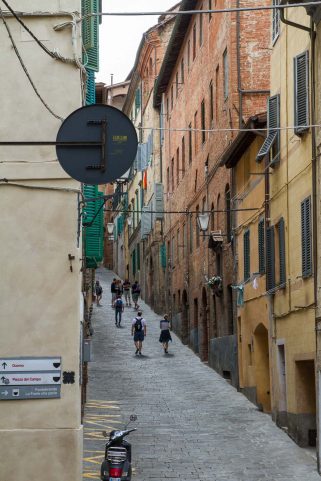 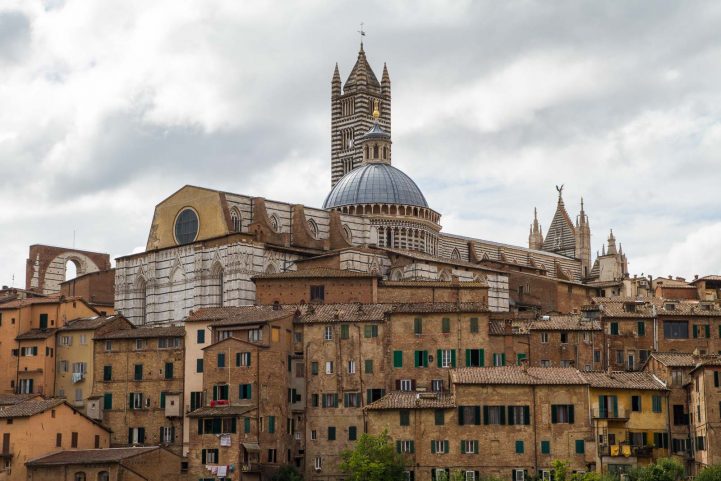 Tuscany is renowned for its quaint little towns all sitting proudly on hilltops, surrounded by large imposing walls and cobblestone streets.

Orvieto is no different, but the Duomo here makes it well worth a visit. A funicular helps make light work of the trip up – very few cars are allowed in the mainstreets of the old part of town.

And it’s hard to miss the Duomo, which sits proudly in the main centre square.

Our guide told us that when the church wanted to build a new Duomo they approached the wealthiest people in the county to see if they would help fund a grand cathedral – something that would outdo all the neighbouring towns. Orvieto must have had some very wealthy residents!

The cathedral is largely empty inside but the paintwork is vibrant. Each of the knaves features interesting works of art. 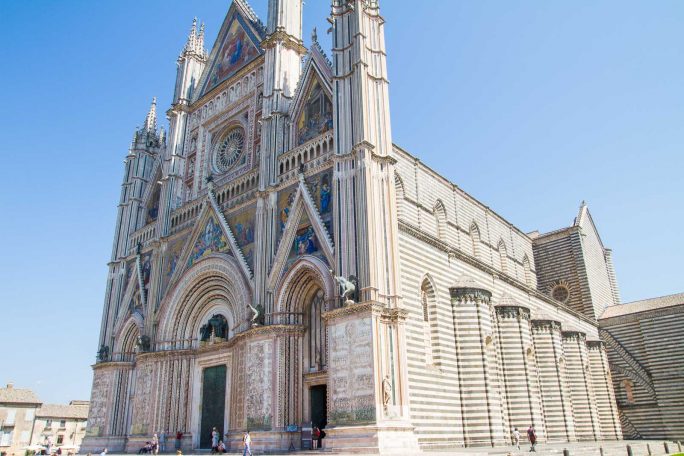 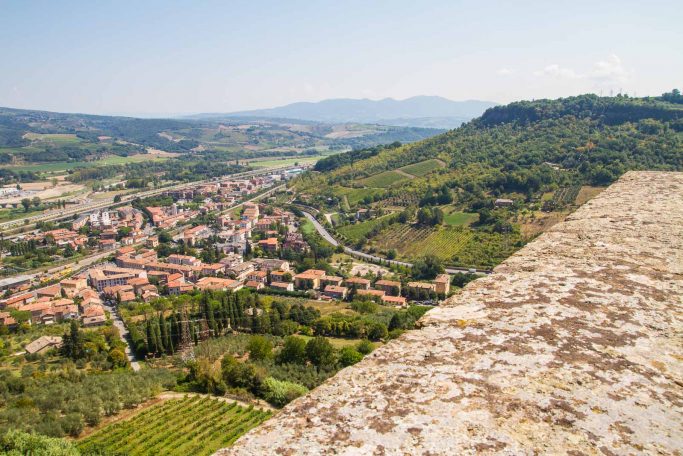 You can buy a single ticket to visit the Duomo and the Museo dell’ Opera del Duomo – the museum – which is located in the Papal Palaces. It’s worth a look just to check out the architecture of the grand old building and in particular the Etruscan-era caves.

This city is famous for being only one of two cities outside Rome with a Papal Residence.

If churches aren’t your thing you can wander through the cobblestone streets, check out the old well or just marvel over the walls at the beautiful countryside.

While it’s very tight, if I had to give you my favourite Tuscan village I think it would be San Gimignano.

Said to be a medieval Manhattan, San Gimignano is famous for its series of tall, narrow towers. Fourteen towers still stand as homes for some of the locals. Many are open to tourists and it’s worth walking up all those stairs to see how people live in such tight spaces. It’s also worth it for the views from the top across the village and the local countryside.

Originally there were 72 towers, all of varying heights as the locals tried to outdo each other – some things never change! The town itself is set inside a medieval wall with narrow winding cobblestone streets, a central piazza or two and stunning views across the region.

San Gimignano is also home to the world’s best gelati – but ask a local for directions, pretty much all the ice cream vendors have signs up saying theirs is the best!

We stayed at Terre di Baccio in Greve di Chianti

We were here for one week and did day tours to the various towns mentioned in this post.

Was it long enough? There is so much more to see in Tuscany and I could have spent longer in Siena and San Gimignano (we had half a day in each).

Highlights – Every town, every winding street, the view around every corner…

*This trip was part of a tour I hosted in Italy with the awesome Two’s A Crowd tour company. 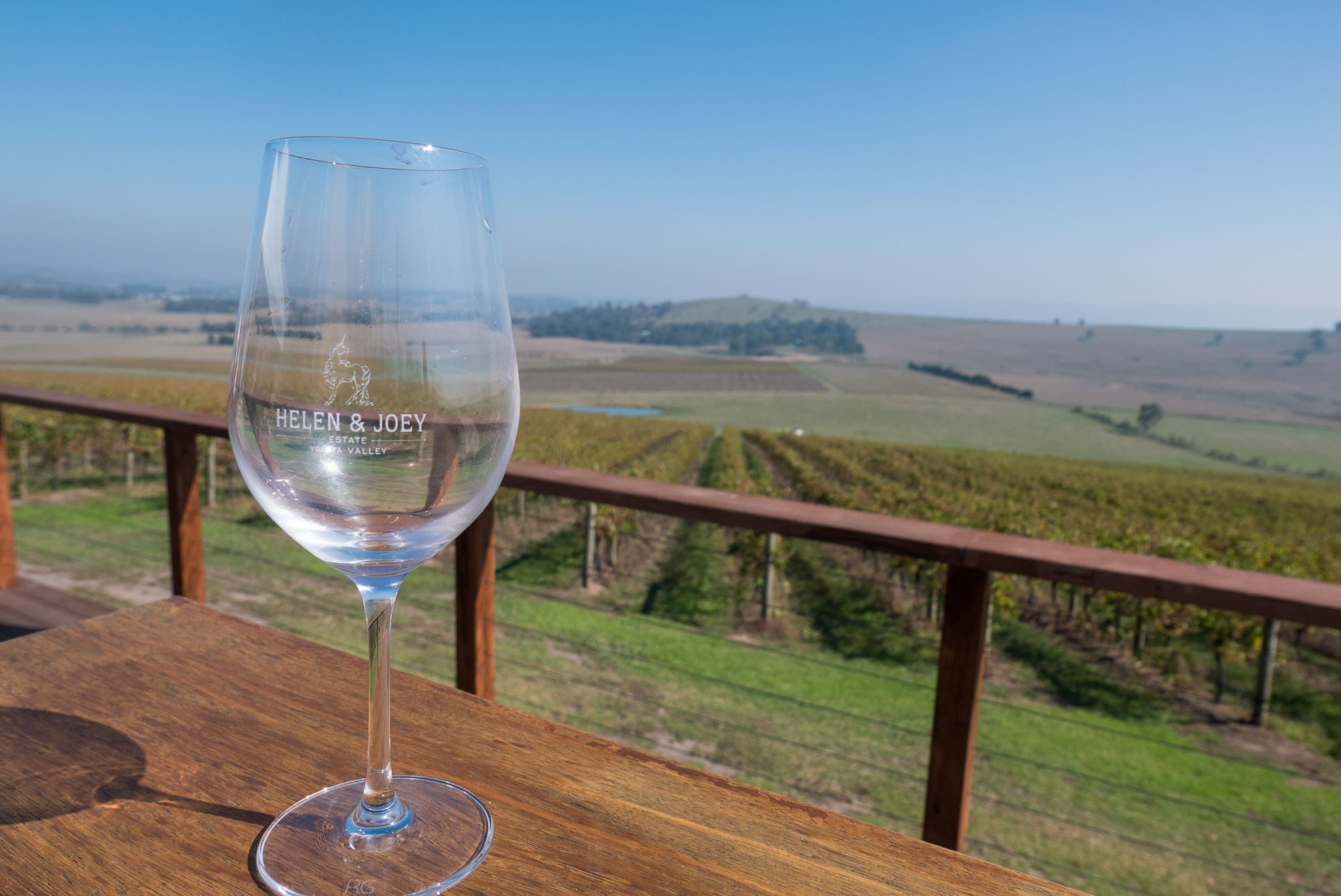 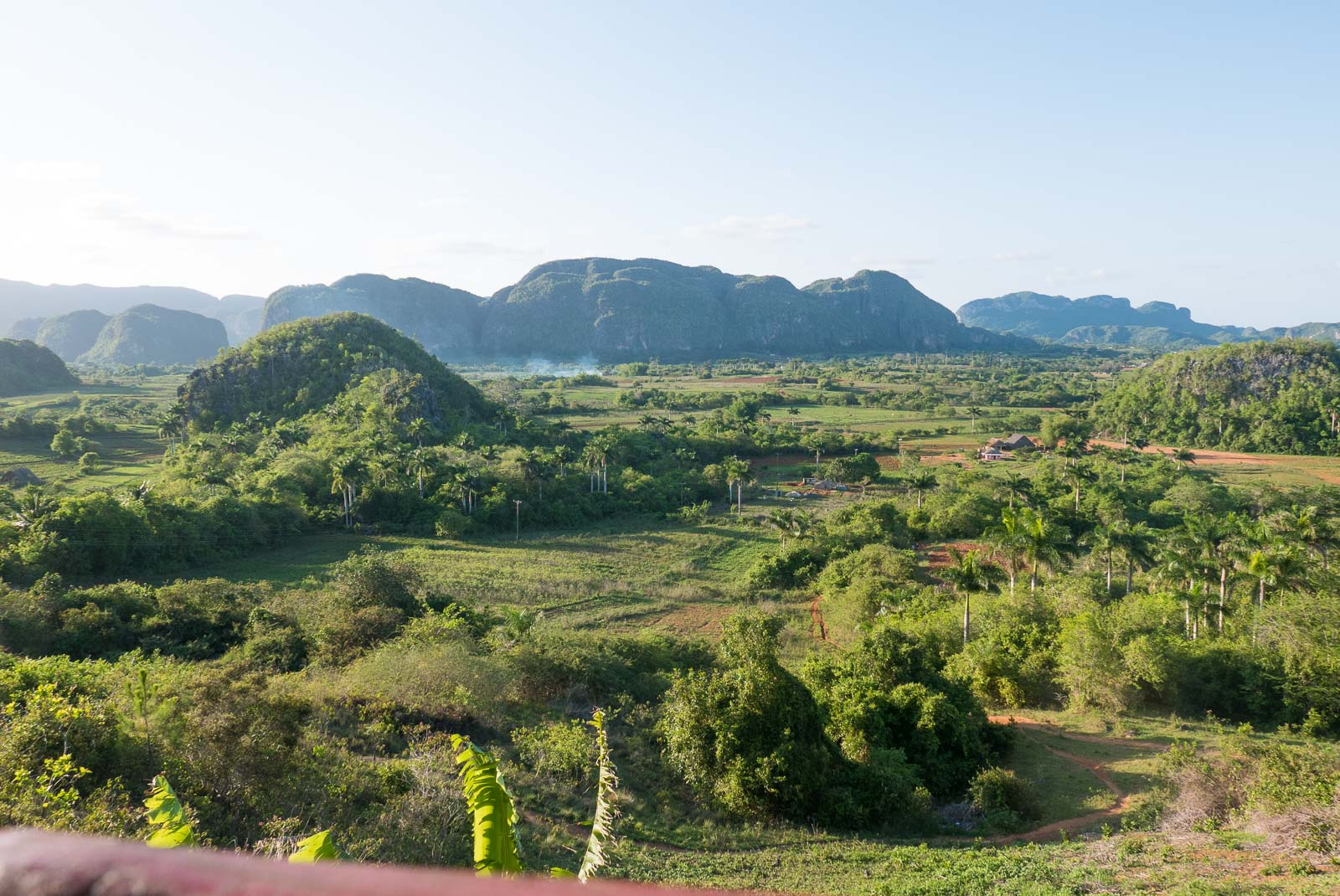 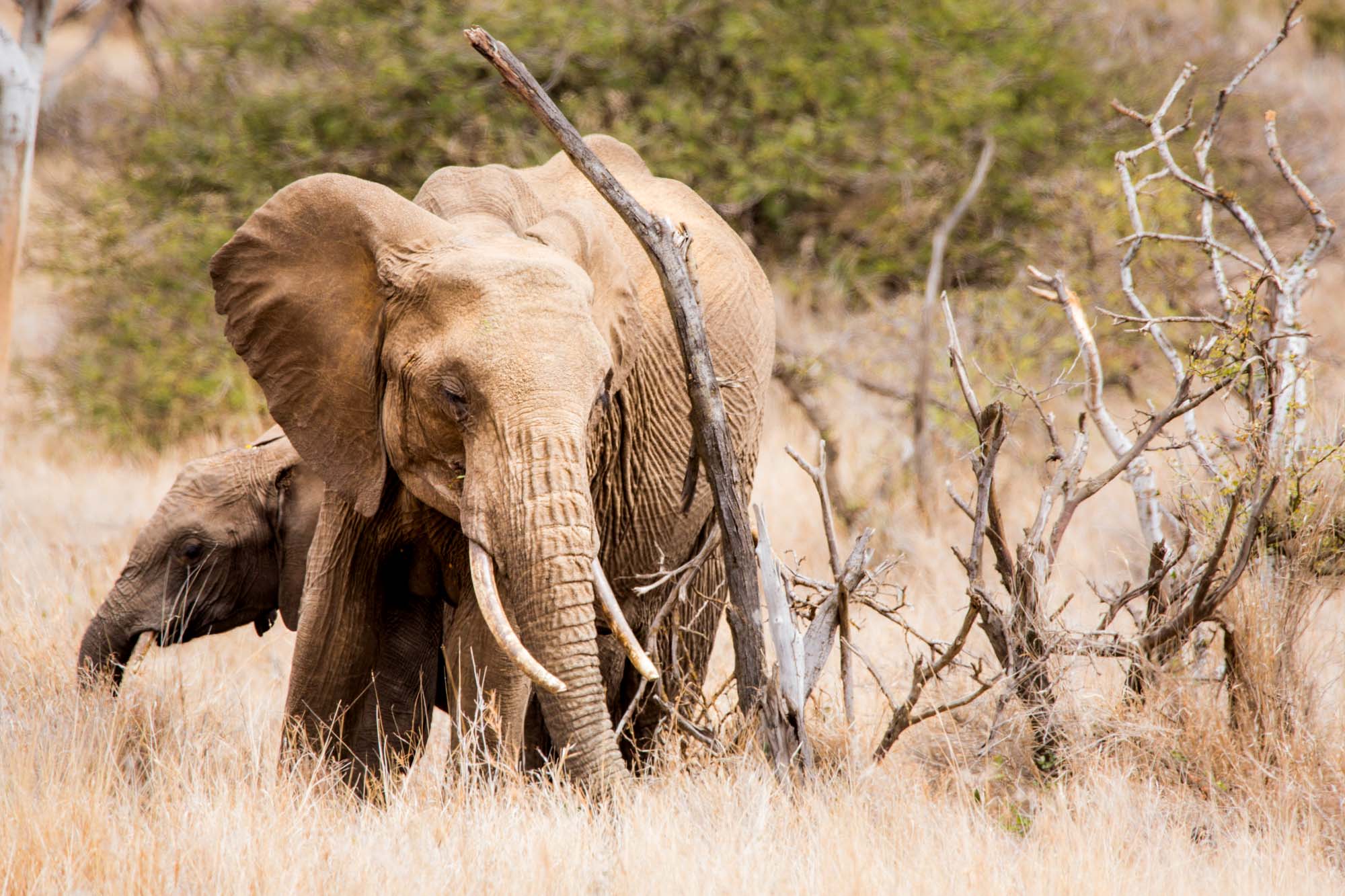