Our first sighting of a quokka comes early, really early. We’d taken the first boat from Hilary’s Boathouse on mainland Western Australia to Rottnest Island and no sooner are we off the boat, than we spy this native hanging around the Tourist Information centre.

Our second sighting of a quokka comes as we walk the short distance to the Bathurst Lighthouse.

We’ve opted to walk, even though we’ve bought a bus pass for the day, it’s just a short meander through the small town on Rottnest Island to the lighthouse. We’re really walking toward The Basin for some snorkelling, but were side-tracked by glimpses of the lighthouse and so we stop to take in the views of the ocean, the green rolling hills of the island and the water, so blue it’s mesmerising. 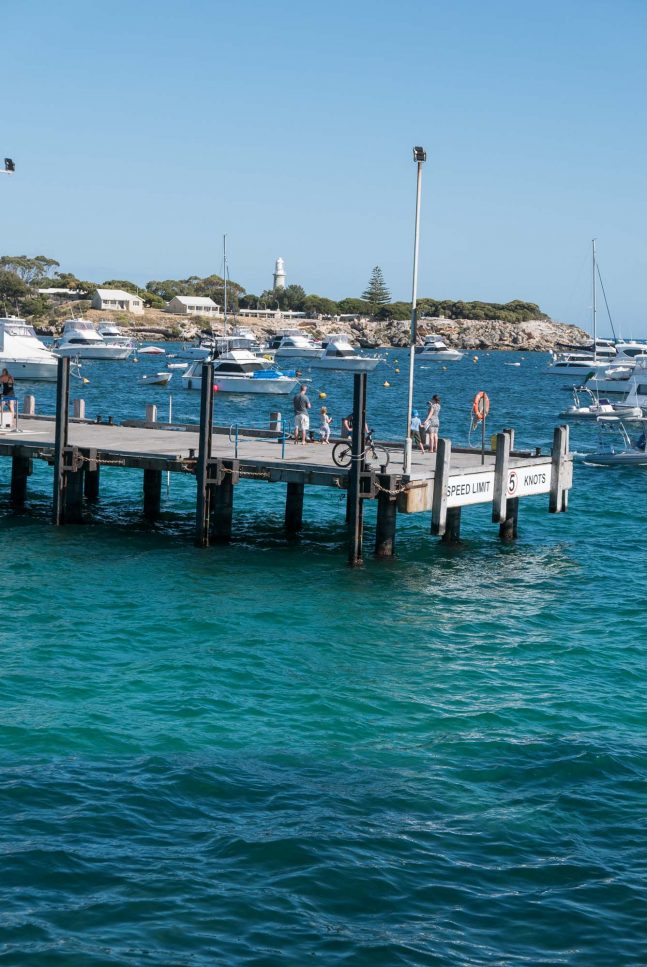 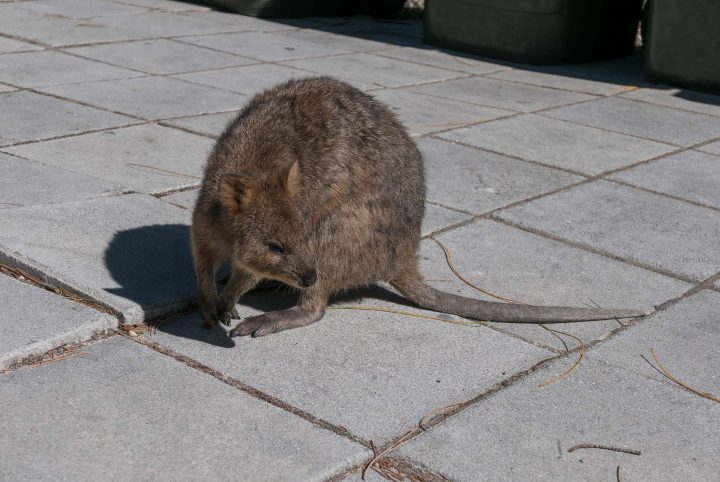 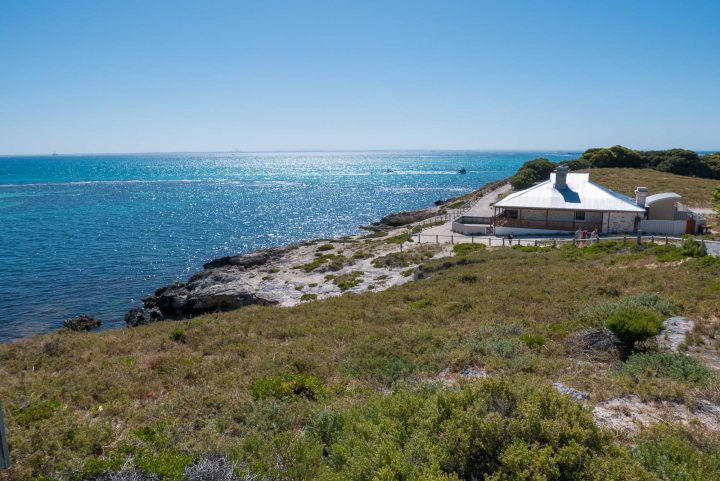 But we’re here with family – Ade’s sister and brother and their partners, mother and father and our niece and nephew – and they all just want to get to the beach. They’ve had enough of exploring, “can’t we just swim?” they cry. And so we relent and make our way to the beach. The sky is blue and while the renowned heat of the Australian sun hasn’t yet begun to bite, we’re expecting rain and windstorms in the afternoon – not good conditions for snorkelling – so we move quickly into the water.

It’s packed. Holidaymakers from all over the world have had the same idea as us; swim this morning, while the weather is good. But even with all these people the water remains clear, the fish circle. Unperturbed by our presence in their home, they brush gingerly against our bodies. Needless to say the snorkelling is excellent.

We snorkel for about an hour. But there is still a lot more to see on this island and so we make our way to the closest bus stop, which just happens to be at Geordie Bay, right next to Geordie’s Café and Art Gallery and we figure that must be a sign. We should eat lunch while we’re here. After all, we’ve only got a day on the island and we want to see as much as we can.

The first time we came to Western Australia we never made it to Rottnest Island, try as I might I can’t work out why we skipped this part of the state. I remember hearing mixed reviews about it, that’s it’s not as beautiful as it looks in the brochures, that there’s nothing to do, that it’s really just about the quokkas. Now if you’ve read much of our blog, you’ve probably figured out that we like most places, and it’s true, we do try to see the beauty, the interesting or the unusual wherever we are.

But believe me when I tell you all those people were wrong. Rottnest Island is stunning. The beaches boast the kind of powdery white sands and aquamarine blue oceans that you expect to see on an island paradise. You know, the kind on every beach resort brochure? The photos of which you secretly suspect may be photo shopped? They’re the kind of beaches we ‘ve found on Rottnest Island.

So here we are immersed in our own island paradise (and when I say ‘own’ I mean us and tens of thousands of other tourists of course). After a quick lunch, we find the bus stop and board the bus, some of our group want to do more snorkelling so get off at Porpoise Bay where the beaches are just as stunning as those on the other side of the island, where we were in the morning. 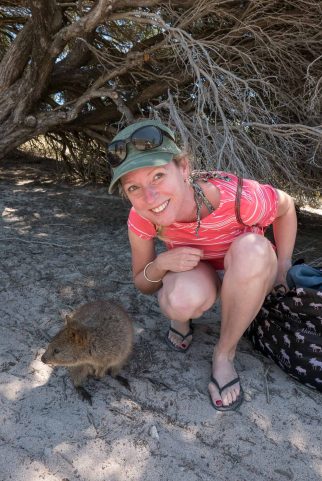 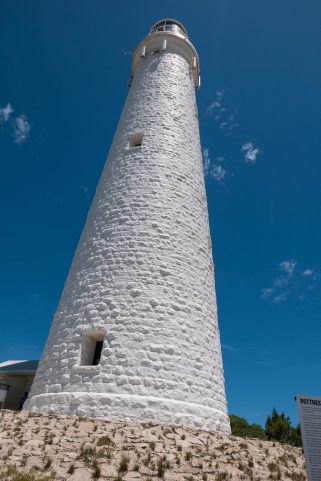 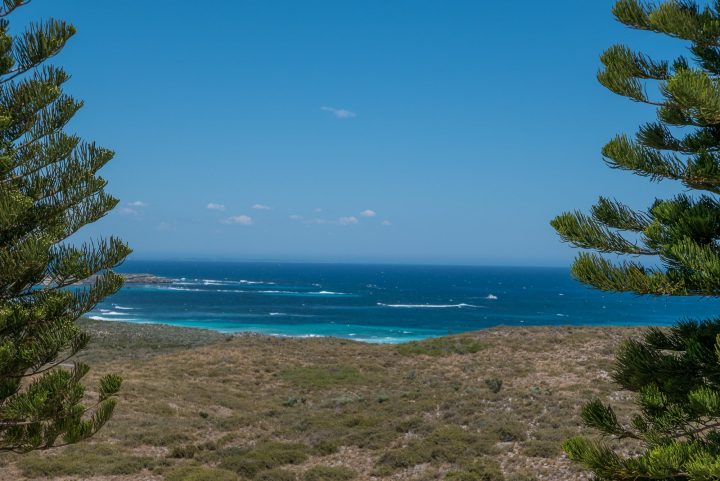 View from Wadjemup Lighthouse – we think it was worth the walk!

But of course, Ade and I want to explore the island. We want to see as much of it as we possibly can. His mum and dad and our niece come with us. Our first stop is the Wadjemup Lighthouse. And on the way we pass more quokkas, they line the street almost like English subjects waiting for the passing of a member of the Royal family. We stop, of course, because we’re still trying to get that perfect shot of a quokka.

Located in the centre of the island the lighthouse is at the highest point on Rottnest with views across the island and out to the waters. It’s a short stop for us, because there is still far more to see. We’re determined to make it to Cape Vlamingh, the western most tip of the island, to venture along the boardwalk in search of local seals and other native wildlife.

Want to read more about Australian beaches? You might like this story on Di’s adventures on the Great Ocean Road

And so we make our way back to the main road and the bus stop. And we wait. And wait. A bus comes past but is too full to pick us up. Another one comes past. By now the Western Australian sun is at it’s hottest. There is no shade and no other way to move around the island. We watch longingly as people glide past on bikes wishing that we could have hired our own, but knowing too that it wasn’t feasible with 10 of us.

My sister-in-law had warned us that this would be the busiest weekend of the year on Rottnest, it’s the Saturday before New Year’s Eve and Rottnest hosts a big party at this time of the year. There are those staying over night, day-trippers like us who have caught a ferry across, those who have come by seaplane and others too who have come by private boat.

The island’s bus service simply can’t cope with this many tourists*.

Finally another bus comes and we manage to squeeze on. But our driver tells us that we won’t be stopping at the one stop Ade and I really want to visit. And now we’re too nervous to get off at another stop for fear we won’t be able to get onto another bus.

Instead we make our way back to the main township – Thomson Bay Settlement – and explore the buildings. It’s a quaint centre, with a few shops, a museum, a local church, a youth hostel and some holiday cabins 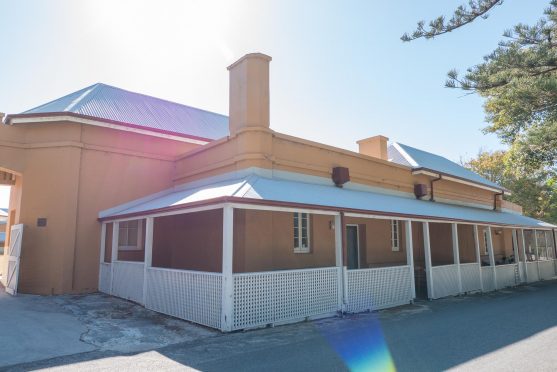 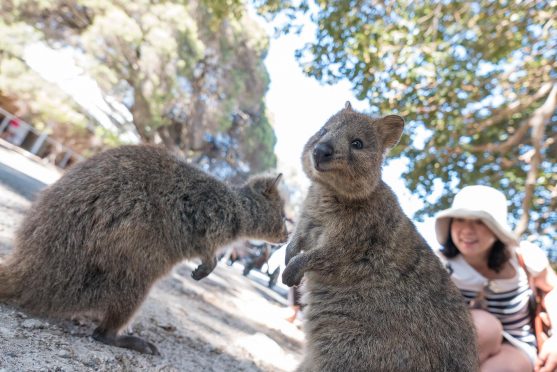 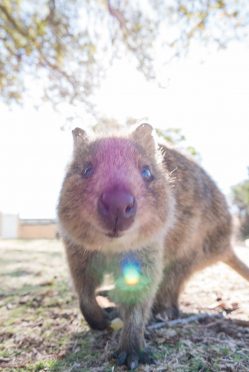 British settlers formed the settlement at Swan River Colony in 1829. Over time it has been a penal colony, a military post and an internment camp for ‘enemy aliens’ during World War 1 and World War 2. Between 1838 and 1931 Rottnest was used as a prison for Indigenous Australians.

Despite this sad history, on the day we visit the township is bustling with people, happy travellers from all over the world. Many of the original buildings have been turned into tourist accommodation. We make a mental note to stay on the island next time we come, to give ourselves time to truly explore the natural beauty of the island.

Oh, and there are quokkas, lots of quokkas! Plenty of opportunities for that quokka selfie! *Rottnest Island Authority gave us a refund on our bus tickets.

We spent a day on Rottnest Island

Was it long enough? NO. Next time I would book a cabin (in low season) and stay a couple of days. I’d spend more time exploring the island and snorkelling in those beautiful waters.

Highlights: Snorkelling off the beach at The Basin, the quokkas!

Tip: If you are able bodied, hire a bike, you’ll get to see far more and have more freedom for your day.

Scroll down to see next article
UK You've been where?

Why you really should add Belfast to your 'must see' list