It’s 6am and already I’m standing on top of a boat, a houseboat, in Ha Long Bay. Around me the boats are just waking up, lights slowly coming on as those on board peer out the windows at the jaw-dropping scenery around them.

It’s one of those “pinch yourself “kind of moments. You know the kind, you’ve seen picture after picture of this land formation, one of the jewels of tourism in Vietnam, and wondered when you’d actually get there, when you’d get to see it for yourself.

Wondered too whether what you saw in the pictures is actually what you’ll find or whether boats and tourists have overrun the place.

I look around at the mountains of limestone rising out of the ocean. Mist, or is it smog, rests over the bay giving it a dreamy atmosphere. But I don’t have long to take in the scenery, to breath in the fresh, still air. No sooner have I said good morning to my tour group than our instructor turns up. We’ve all gathered on top of the boat to learn tai chi. As if sleeping on a boat in the middle of a UNESCO Heritage listed wonderland isn’t enough relaxation, we’ve pulled ourselves from the soft cotton sheets to learn a new skill, some new moves. 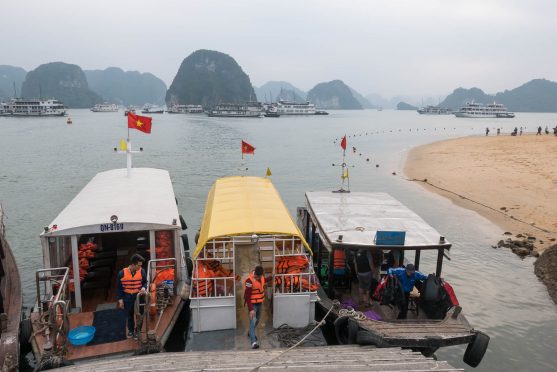 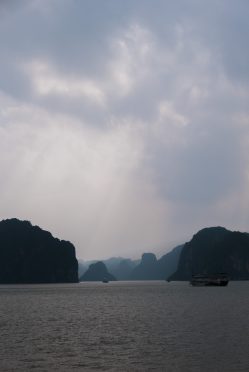 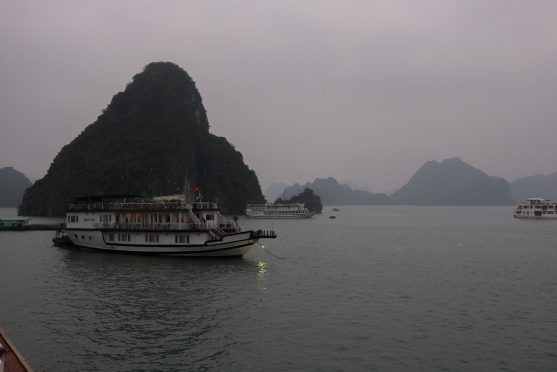 Our guide switches on his iPod, giving us music to move to, across the water I see a couple look over at us from the top deck of their boat. But soon I’m immersed in the free-flowing movements, mirroring – or at least trying to mirror – our instructor.

The Tai Chi lasts for about 45 minutes. If the idea is to get lost in the movement, it doesn’t work, but how could it with the views that surround us?

We had arrived at Ha Long Bay from Hanoi just a day earlier and boarded our ‘Junk’ in time for a seafood lunch.

After lunch we visited Ti Top Island. It was crowded when we turned up. The tourists have taken to Ha Long Bay in their droves but I’m not complaining, we’re among those tourists fighting for our spot on the small island. We joined the throng and walked up to the lookout. It’s about 400 steps straight up and from the top are 360 degree views of the Bay – we could see the boats, almost 100 of them in the small area approved for boats by the Vietnamese Government and beyond that, the quiet protected area of the bay where tourist boats are not allowed to venture.

When we first boarded our junk there were hundreds of boats all making their way into Ha Long Bay, but it wasn’t long before we forgot they were there, found ourselves traversing the waters seemingly on our own. But at the top of Tip Top Island we’re reminded of the volume of boats sharing this experience with us.

Ha Long Bay encompasses an area of about 1555km2 off the north east coast Vietnam. It consists of almost 2000 islets, most of which are limestone. The limestone has formed over about 500 million years and the karsts (eroded limestone) shaped from 20 million years of tropical weather conditions.

After we’ve had our fill of those spectacular views, we make our way down to the beach. It’s crowded and nets not far from the shore restrict the swimming area. Only one of my group decides to swim, the rest of us agree it’s far too cold.

Back to our boat, for a seafood dinner and then our guide starts up the karaoke machine, we sing and dance our way into the night. Between songs, in our quieter moments, we can hear music from the boats around us, all revelling in their own Ha Long moments.

But back to Tai chi. When I awoke this morning I looked out my window at the sheer cliffs of the islets around us. All so still and quiet. The perfect location for a Tai Chi lesson. That was before I considered how distracting new and novel the views are. Still, we made it through the session, got our bodies moving and tried something different, and isn’t that what travel is all about after all? Trying new things? 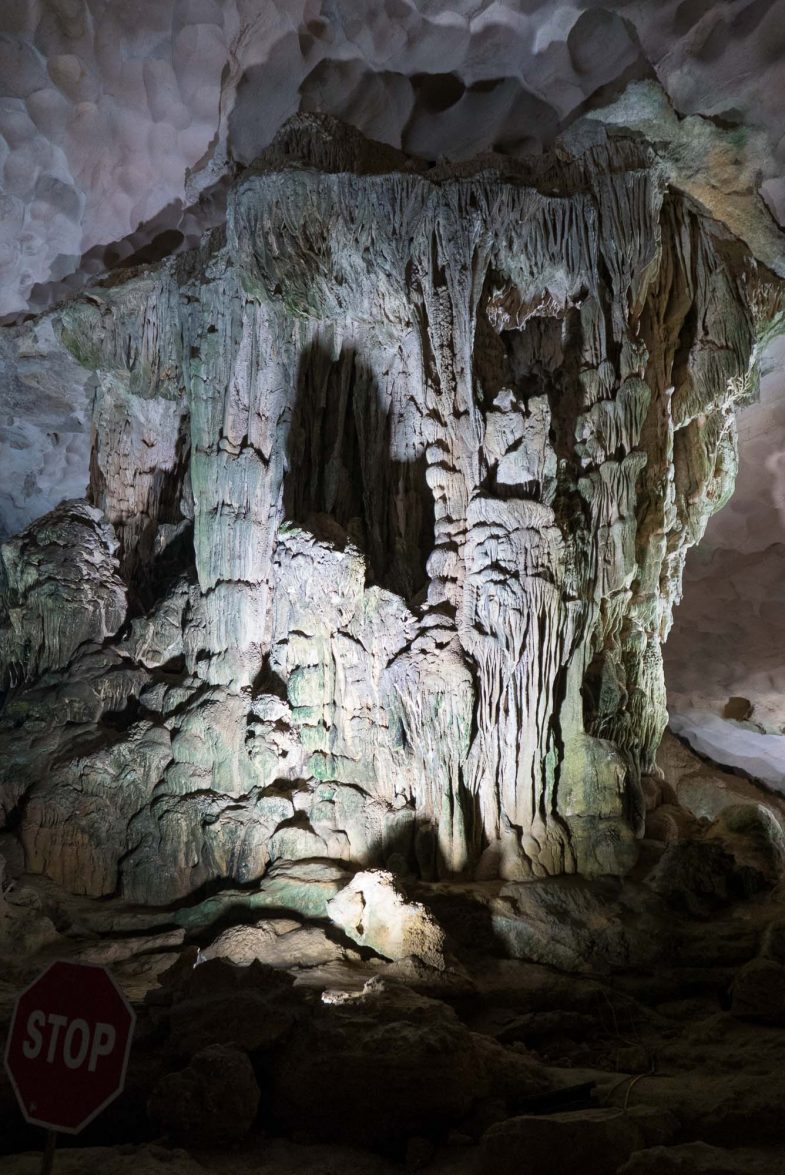 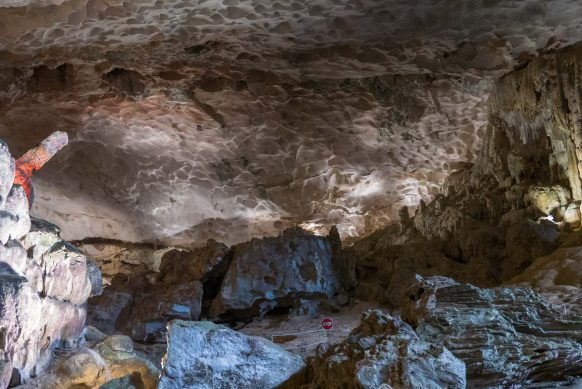 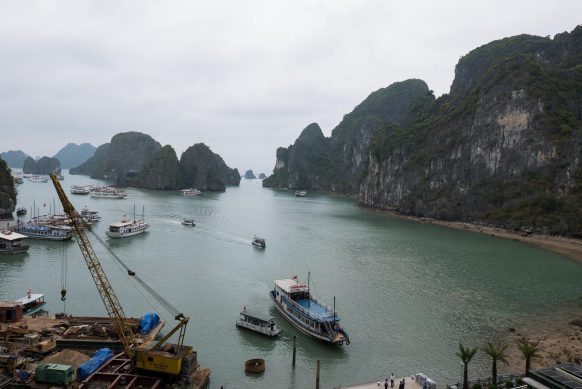 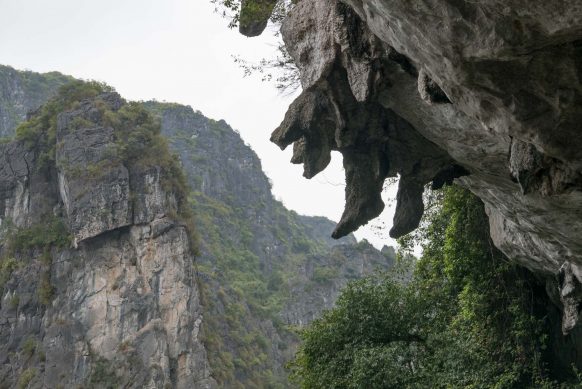 After Tai Chi we head to Sung Sot (Surprise) Caves, and they are indeed surprising. A large cavern full of stalactites and stalagmites inside awaits us. We wind our way through the caverns, three in all, each bigger than the one before, as our guide points out interesting shapes in the land formation.

Vietnam can feel hectic, chaotic, but here on Ha Long Bay, despite the volume of boats and tourists, we get a respite from that busyness. It has provided us with a moment of calm before we once again face the frenetic pace of Hanoi.

We travelled with Bai Tho Junk. (Don’t be fooled by the word Junk, in one of the junk boats I’ve stayed on we had heated toilet seats!)

We were here for one night.

Was it long enough? It was nice and relaxing on the boat, but one night was long enough to check out the main sites. As always, more time would give you the freedom to explore further.

Highlights: Relaxing! Surprise Caves was fascinating, but really just looking at the interesting land formations throughout the bay was stunning. Oh, and the karaoke of course.

*This trip was part of a tour I hosted with Australian solo travel company Two’s a Crowd. We travelled with Buffalo Tours.