Our first leopard spotted on the plains at Samburu

It took us about four hours to get from Sweetwaters to Samburu, but then we did take in some obligatory tourist stops along the way.

We stopped at the equator to get some cheesy photos – one foot in the southern hemisphere, one in the northern that kind of thing. We had the water turning demonstration by a local and got suckered into spending $8 on a certificate to say we had crossed the equator, it was all good fun, though I’m sure we could have bargained him down on the certificate.

We then “had” to go into one of the local shops where they persisted until we bought something, their first price was four times what we had seen the goods for in the shop at Kibo resort – our first campsite, so we bargained them down somewhat, but still paid a little more than what we probably should have, but isn’t that part of the fun?

On our way again and our next stop was Isoilo, a small town not far from Samburu, where we stopped for petrol. The town was nothing more than a cluster of shops lining the main road, but of course we were a target and were soon approached by a man selling jewelry and other trinkets, so we bought a bracelet and letter opener for $5. Further on and our guide said we had to stop to sign in before going any further. Apparently people frequently went “missing” from the road ahead, still not really sure what that means, are we safe? No idea, but we pushed on ahead, and Jackson said it so matter-of-factly that I didn’t really have time to process it until we had moved on.

Of course I had to find out what he meant, apparently the war between the Samburu and Somali warriors has meant that people have been kidnapped travelling along the road to Samburu National Park so anyone travelling on the road has to sign in.

The border to Somalia is actually some 600 kilometres away, however some Somalis migrate to the area. The river Iwasara separates the two tribes, but evidently there is still trouble.

When we were there, Samburu had been ravaged by drought and the park was very dry. The river that runs through Samburu Lodge, which apparently normally teems with wildlife – elephants, buffalo and crocodiles – was completely dry. There was still wildlife around the campsite, monkeys at play, an abundance of birds, even an elephant or two wandered down to the riverbed. And with the dry riverbed giving animals easier access to the tourists, we were accompanied every night to our cabin by an “armed” guard, Joseph. Armed with a slingshot, he assured us we were safe as long as he was around!

Unfortunately we were not quite so safe at breakfast, when a monkey took a fancy to my croissant and jumped across the table in a flash to steal it from my plate. I’m not sure who was more scared – me by the monkey or the other tourists shocked by my screams. 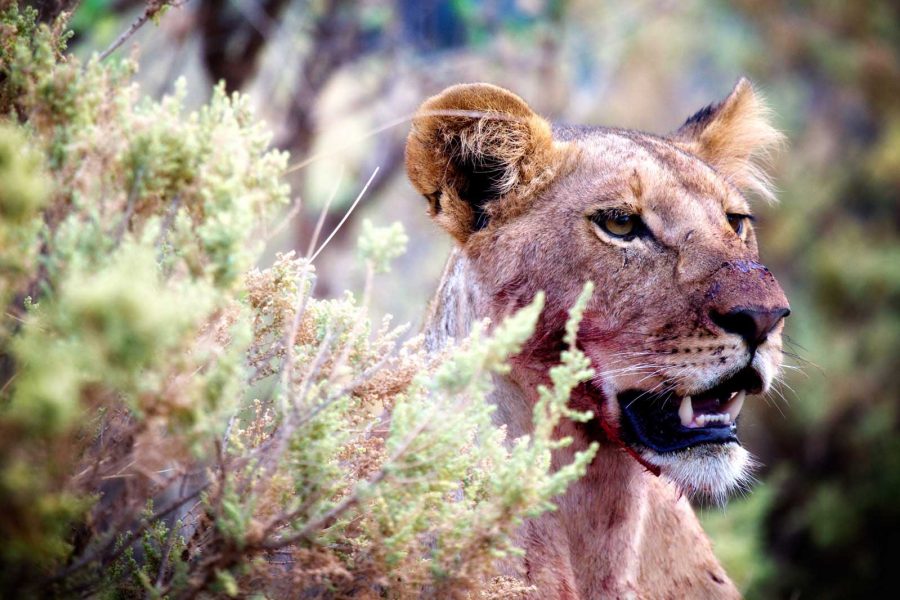 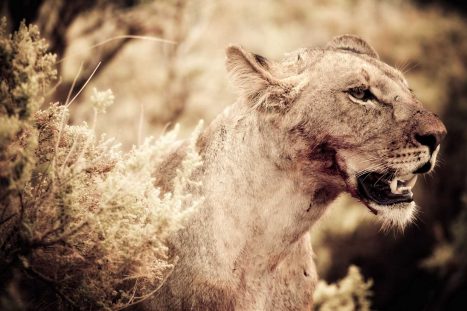 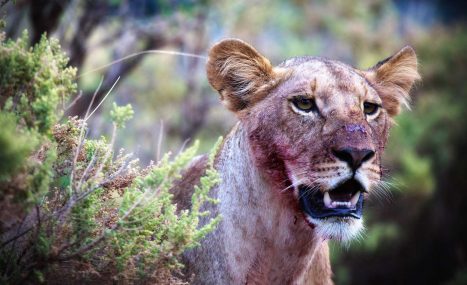 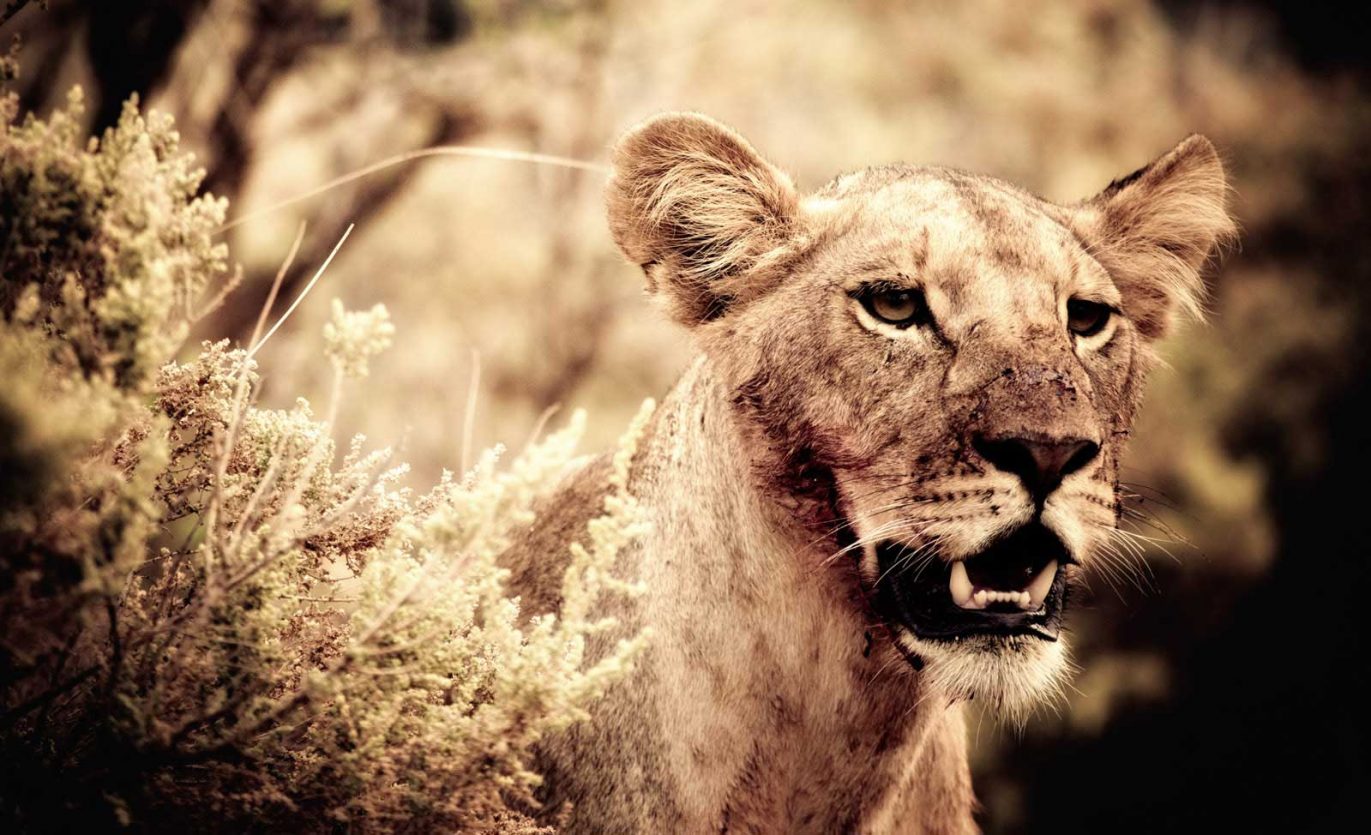 Samburu National Park itself is abundant with wildlife, we saw lions, elephants, giraffes and cheetah in the savannah on our first afternoon.

During an early morning drive we were out in the park in time to see lions with their morning kill. There were about five lions all playing and moving around, blood still trickling from their mouths. They had killed a zebra and a buffalo – not a bad breakfast. Rounding a bend on an afternoon game drive, we finally spotted our first leopard. With a dozen vans jostling for position, we queued up to get a glimpse of this elusive creature. The leopard was wandering from bush to bush, between the tourist vans, seemingly unperturbed by the attention. We had seen a leopard in Tanzania five years earlier, but it was so far off in the distance it was really difficult to make it out. This time it was so clear, it walked right behind our van.

Eventually the leopard wandered into a bush where it remained for the afternoon – relaxing away from the hustle and bustle.

It wasn’t all safari drive and animal watching at Samburu. We decided to take a break from the van one morning to watch the graceful Samburu people in one of their regular performances. I love the colour and regalia so often worn in African cultures and the people of Samburu definitely didn’t disappoint. 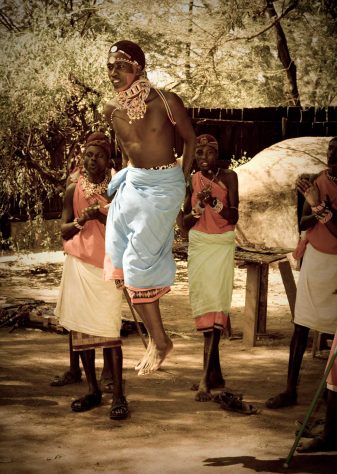 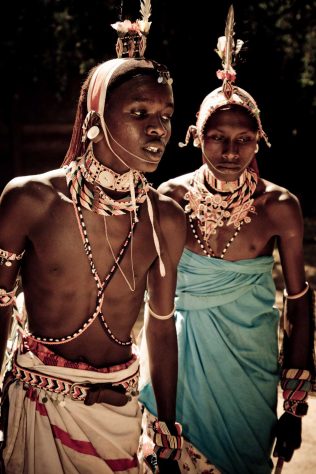 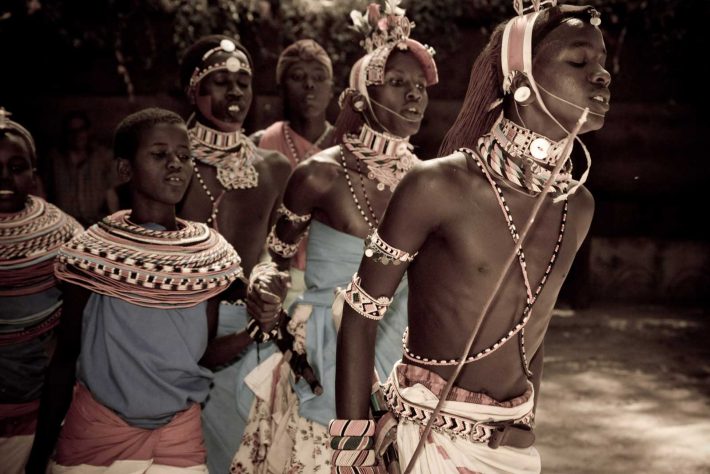 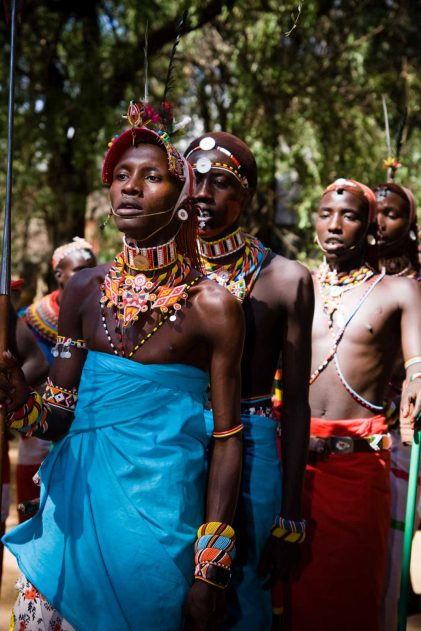 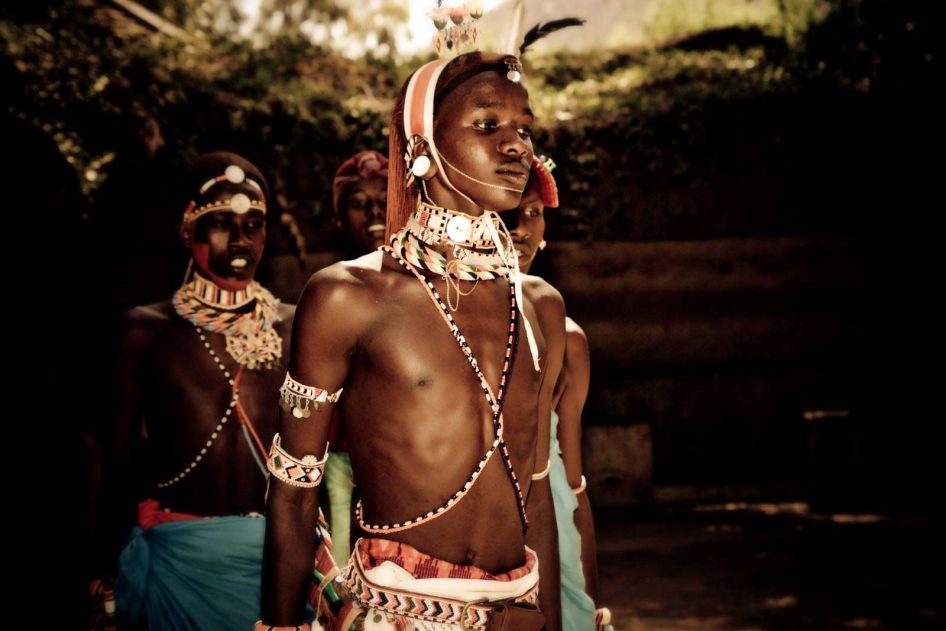 It is distressing to see all the vans jostling for position as the animals move around. We saw one van – a Private Safari company van – drive straight toward an elephant that was blocking the road to try and get a better position! This is disgusting, unfortunately everyone wants to get the best pictures and the tour drivers know they will get a better tip if they get the best spot for their tourists. Our driver tried to get a good spot, but stopped to wait for the elephant to move and was respectful of other tourists and vans wanting to see the wildlife. We stayed at the Samburu Game Lodge.

Was it long enough? We were very happy with what we saw in the two days we were here and didn’t feel like we needed any more time here.

Highlights: Stopping at the equator for cheesy photos on the drive from Mt Kenya to Samburu, seeing our first leopard, watching the beautiful people of Samburu perform.